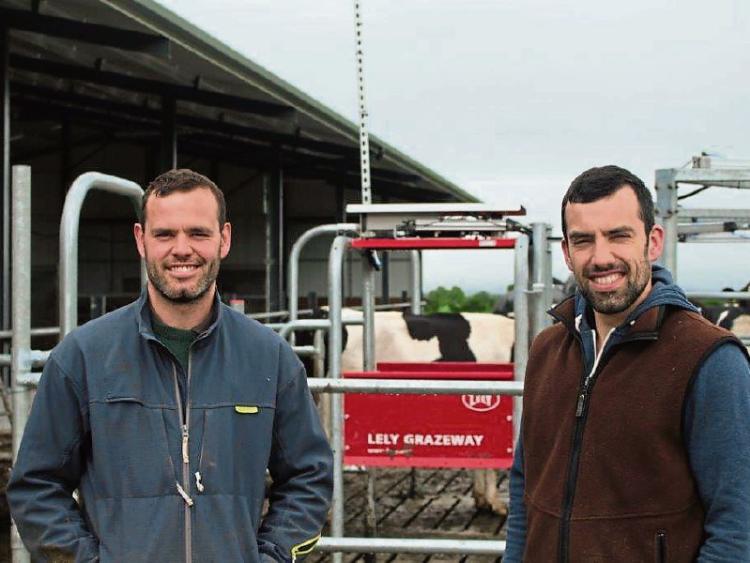 All round sportsmen and keen Danesfort farmers, Robert and Philip Walsh have gone all robotic.

They use a Lely Astronaut Milking Robot to milk cows on their out-farm.

It is working well and members of the public are invited to an open day at the farm at Rath, Danesfort on Wednesday, June 21 to see it for themselves

Robert and Philip farm with their parents Tom and Margaret Walsh.

The Walsh family come from an existing dairy farm but only began milking on an outside farm with a Lely Astronaut A4 milking robot in March.

Currently they are milking 70 British Friesian X cows averaging 26kg of milk at 3.3% Protein and Butterfat of 4%.

Why a Lely Astronaut Milking Robot?

‘’I had seen some advertising on milking robots a couple of years ago and initially I looked into it further for the home farm,” Robert said.

“However we were considering expanding the herd at some stage post quota and after a lot of thought we decided a separate dairy unit on our out farm with 1 Lely A4 and 70 cows would be most suitable.

“In time we may expand further but at the moment we are interested in how things will go for the remainder of the year.’’ explained Robert.

Robert and Philip both have off farm employment and find the flexibility of the Lely Astronaut and grazing system very beneficial to their working schedule.

‘’We are milking 180 cows on our home farm using our existing milking parlour,” Philip said.

“In total we are spending about six hours a day between milking and managing the system while on the robot farm we are spending no more than an hour a day this time of the year. ‘’ Philip remarked,

‘’Most of the work is done before we head to work in the morning like changing wires and washing around the robot.

“We find the flexibility with the robot very beneficial especially when we are busy with work on the home farm. Important tasks can be done at different times throughout the day’’ Robert added.

‘’We can organise the grazing system a particular way over the weekends that it is very quick and easy to move wires if we need to be elsewhere’’ Philip said.

’As far as I’m concerned it’s all about grass allocation and it is the only way to make them travel,” Robert felt.

“At the moment we are managing our grass better on the robot farm than on the home farm and we are seeing a big difference.

We have learned so much about grass that we didn’t know before and as result we have carried that back to our home farm.

“We now pay much more attention to what cows are grazing before and after parlour milking.

“’We had a separate block of ground that we used for young stock, beef and silage. We felt that we could utilise that farm better with milking cows. We are growing 1.5 times more grass than what we were growing before. “We feel that we are utilising the grass much better’’. Robert said.

‘’Flexibility of the ABC grazing system helps when strong grass may need to be baled and taken out.’’ Philip said.

As for using the Lely T4C management software. ‘’We found it very easy to navigate having been shown initially, we understood the basics soon after start up. As the year goes on different things will need to be done like feed rates, milking access, AI dates, calving dates, scanning dates etc. At the moment all of our AI dates and medicine treatments have all been put on the T4C system and we hope to use it as our main information tool going forward,” Robert said.