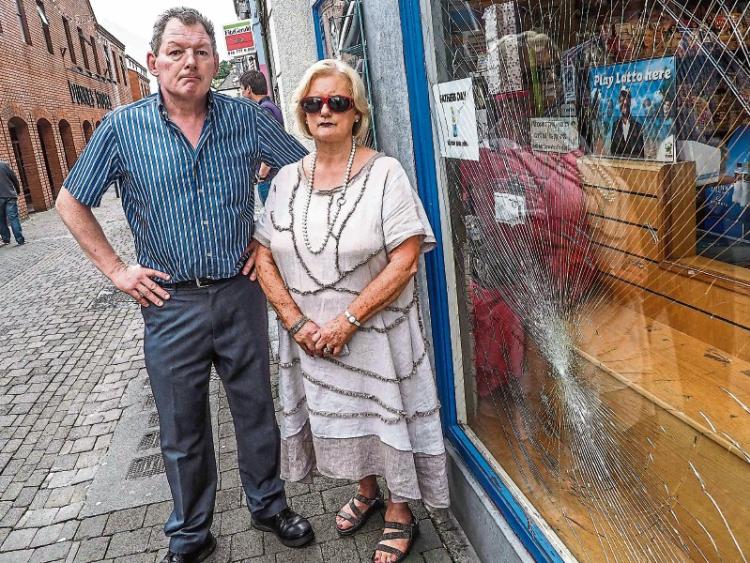 A number of worrying assaults in the last week, as well as the ongoing, serious intimidation of staff and shoppers, continuous use of bad language, littering, fighting and loud music has led shopkeepers on Kieran Street, Kilkenny to take a stand.

Martin Crotty of the very popular cafe/restaurant on the street said that his takings are down between 25% and 30% in the last year because of the behaviour of gangs of youngsters who congregate across the road from him, outside Dunnes Stores, under the arches.

He said customers were sick of hearing the “F” word and the “C” word as well as the littering, fights, drinking and rowdiness on the street, including dangerous dogs being left off the lead.

He said that he and the other people working on the street have had enough.

Next door to him, Maire Keane runs Tiffany's. She has the same story. Young people, bullying and intimidating shoppers, making it difficult to even get by. "It's like something out of a horror movie," she said.

And she claimed that if she carried on like the unruly mob across from her premises, she would be arrested.

Nichola O'Meara, manager of the Sue Ryder shop on the street has often left the shop after closing up in tears, after what she has been through during the day.

She doesn't know how much more she can take and the evidence of what she said is there - Little of nothing in the till at the end of the day.

She left Manchester and came home to Kilkenny because of the crime and trouble over there but little did she know she was walking into something far worse.

She has seen shoppers walk in put their eye on a nice item and then leave abruptly because of the noise across the street, the use of profanities and the fear generated by these young people.

"The truth is that people are no longer comfortable coming down here and you can say what you like their is serious intimidation out there," she said, pointing to the street.

Her takings are down around 25% and she said it is a direct result of the anti-social behaviour across the road from her.

Martin Crotty and his wife Mary are well regarded and give much back to the community. They are having sleepless nights over what has happened.

"I really fear one of our staff or customers will be next to be assaulted," he said.

There have been a number of serious attacks on the street in the last week and the Butter Slip, off Kieran Street was covered in blood last week after another unprovoked beating.

A 92-year-old woman was robbed of her purse on Wednesday morning on the street. Two front shop windows have been broke in the last week.

"Something is seriously wrong and we're not getting the backing we need," he said.

He has never seen anyone fined for littering on the street yet his rates are going up again this year.

He has nothing but praise for the gardai and said that the unruly mob that turns up on the street laugh at the officers who try to move them no, claiming they are entitled to be there.

"I don't think the gardai have the powers to deal with these people," he said, picking out Gda Stephen Hogan for particular praise.

He added that the free wifi from Dunnes Stores was part of the reason that the mobs stayed on the street.

"Dunnes Stores have a responsibility too here," he said while saying that Dunnes regularly cleaned the area under the arches but he thinks they should have security there as long as they provide free wifi and allow the young people permission to stay under the arches.