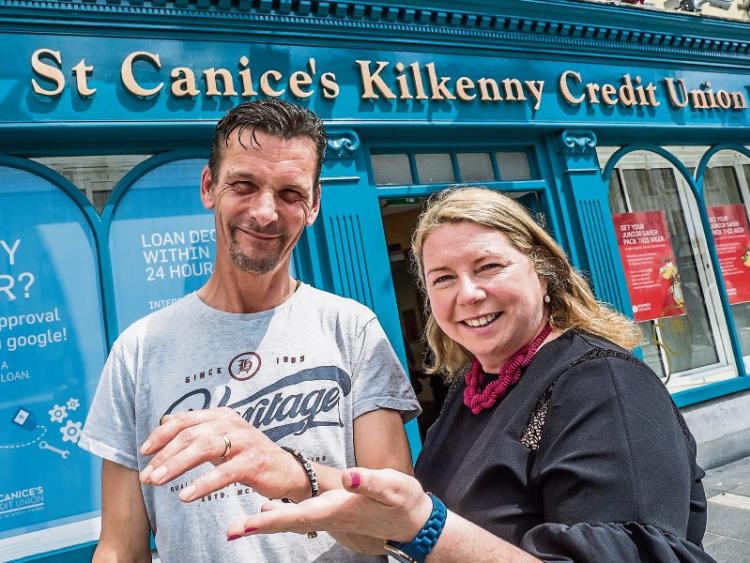 After a 17-year long separation a wedding ring has been reunited with its rightful owner following an appeal on social media.

Marketing manager at St Canice's Credit Union, Rosin Gilroy explained how during recent renovations at their High Street premises she found a wedding ring in their lost property section.

“We are in the middle of renovating and moving premises. I was upstairs and going through the lost and found section and I found a wedding ring with a simple inscription which reads Declan and Margaret 1994.

“I decided to put it out on social media and uploaded a picture of the ring on Facebook and Instagram on Thursday evening,

“People were quick off the mark and the following morning, the owner called into the credit union to see if the ring we had posted was the same one he had lost all those years ago and it was,” she said.

The owner, Declan Whearty from Kilkenny City lost his wedding ring outside O'Loughlin Gaels GAA Club over 17 years ago.

“I was walking home after a night out and the ring was a bit loose and it fell off. I heard it fall but it was dark so I could not find it. I went back the next morning but there was no sign of it.

“Over the years I thought about buying a new one but it would not have been the same. It is great to have the ring back and this time I will make sure it doesn't fall off,” he told the KilkennyPeople.

The staff at the busy High Street credit union were thrilled to help bring about a happy ending to the story.

Ms Gilroy added that she was 'delighted that the ring has been returned in less than 24 hours'.

“It shows the power of social media. There has been a great reaction to the post on social media with some people even calling for the couple to renew their vows,” she added.

Declan is married for the past 23 years to his wife, Margaret and the couple have a son and daughter.

The original post which was published on the St Canice's Credit Union Facebook page has received more thatn 400 likes with people congratulating the couple on their good news. and wishing them well in the future