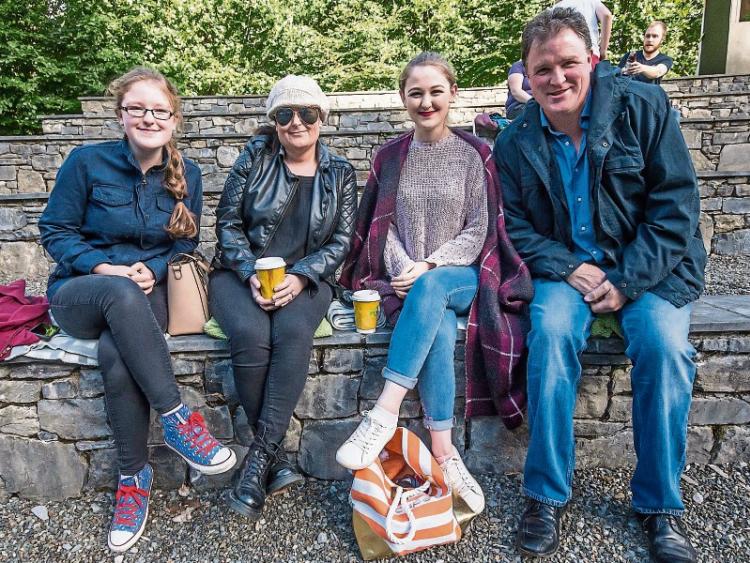 It may not be the biggest festival in the country, but boy, the Abhainn Ri festival in Callan town can pack a punch.

And if the opening weekend is anything to go by come next Sunday when the festival closes it will no doubt be one of the best and most successful ever in its short eight year history.

It was absolutely breathtaking, spectacular and so entertaining as it kicked into action.

And with loads of action for the remainder of the week it’s looking like the Festival is going to break all attendance records as the weather will be certainly playing its part.

One of the most forward thinking projects in the Festival is the “Todo Por La Praxis” Lead Walking tours with the Youth Club based at the Friary Complex.

Certainly judging by the numbers attending all the events last weekend it is pointing towards record attendances.

The annual Cemetery Mass at Kilbride on Friday night last has become very much part of the opening of the Festival weekend and huge numbers from all over Ireland, Britain and United States of America attended in glorious sunshine.

The official opening of the festival was staged at Hourigan’s Bar on Lower Bridge Street.

Hourigan’s has become the favoured venue for the first night and it certainly was a very special one.

As well as the annual big traditional session this year local musicians were joined by Croatian Choir ‘Kamene Babe Ensemble’ who were in Callan to perform at the festival.

The meeting of the two musical cultures was totally impromptu and they enthralled the packed attendance to the rafters of the old bar.

The Croatian choir was founded in 2015 with the goal of developing innovative artistic and musical practices and in doing so reviving the musical heritage of the Baltic regions.

Bringing them to the Abhainn Ri festival proved to be a wonderful experience for so many.

On Saturday afternoon the visited Strathmore Lodge Nursing home to entertain all the residents and as well as overwhelming everyone in attendance the choir and musicians said it was one of their greatest experiences to play in front of the Nursing home residents.

The choir’s main concert on Saturday was to be performed in the Abbey Meadow but was moved indoors to the Kcat building because of fears of the weather.

Again their reputation had spread as again huge numbers turned up to listen to the Croatians.

Many in attendance would have a love of coral singing and performance but as many said this was one of the finest coral performances they ever attended.

The harmony matched with the background drums was spectacular. Later in the evening we skipped across to Fennelly’s on Upper Bridge Street where the new cafe was converted into a music and comedy venue for the evening.

Comedian Joe Rooney of Father Ted fame was a scream as he entertained the large sized audience.

Later Funk, Dance, Rock duo Little Grit set the tone for a memorable night and of course the pizzas from the clay oven are a must at any Fennelly’s night.

The Field Day Event at the Abbey Meadow as blessed with wonderful weather and the organisers recorded a record attendance this year.

The novelty events such as the Great Callan Duck Race, The Battle of the Bands and of course spin the wheel all proved to be wonderful attractions.

The festival culminates with the Grand Parade and open air Tapas Party on Sunday evening. So get on yor bike and come to Callan for some great fun.