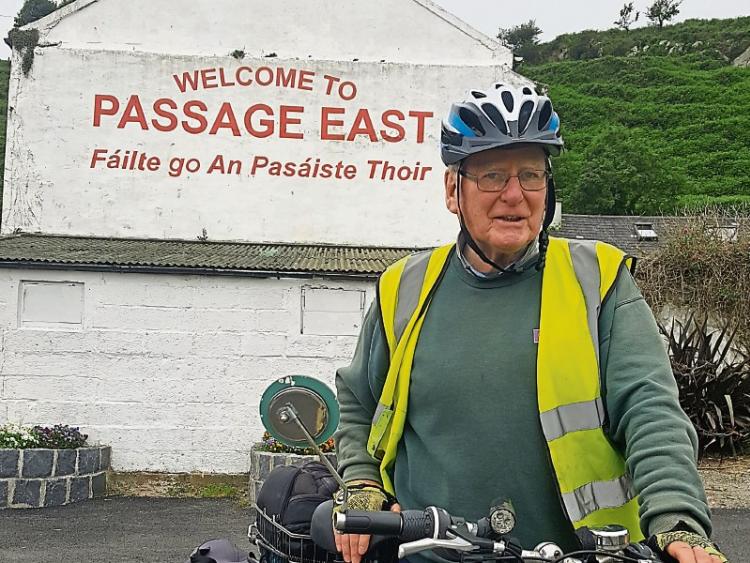 A remarkable 76 year old cancer survivor has returned home after cycling around Ireland for charity.

Pat Nolan returned to a hero’s welcome after completing his bike ride around the entire coast line of Ireland.

In doing so, he fulfilled a life-long ambition to help youngsters hindered from going to third level education because of financial constraints.

He has set up a bursary which has been supported by his many friends.

On his return from his travels he was met by a group of well wishers at Kilkenny Castle, organised by Frank Lanigan, Chairman of Kilkenny Archaeological Society.

It was a fitting end to a journey covering 2,870 kilometres which took Pat, who has pacemaker, just two months to complete.

Pat explained that the Coastal Charity Challenge was a determined effort to cycle the entire outer rim of Ireland on his ‘bog-standard’ bicycle unaided by any form of external power.

On his journey he was struck by the kindness of people.

He had to stop several times a day and knock on doors looking for water.

“As a complete stranger I was met with nothing but kindness and tea and even meals,” he said.

He had to battle against west of Ireland strong winds and overcome a major rain storm in East Belfast.

He was stunned by the amount of litter he found everywhere.

As a former judge in the national Tidy Towns competition for over 40 years and having retired this year from that job, he noticed that on the south coast and even up to Galway discarded fag boxes were everywhere.

“After Galway it was mostly discarded water bottles along the Wild Atlantic Way,” he said.

Everywhere the changing scenery and powerful sea views underscored the reality that we live in a wonderful country.

For many years Pat harboured the dream of cycling around the coastal rim of the entire island while indulging his interest in history, folklore and his well know fascination with landscape while doing so. But there was also a serious purpose and worthwhile reason for his remarkable odyssey.

“Many years ago, while in national school a very intelligent and hardworking fellow student was denied the opportunity, some might say the right, to advance to second level education because his family just could not afford the costs involved both for fees, books and related outlay,” he said.

The episode has remained with him. So, in association with Waterford Institute of Technology (WIT) he is creating a bursary whereby a young person of talent, intelligence and commitment will not be denied educational opportunities due to lack of personal or family finance.

A small committee of his friends has resolved to aid him by adding to the sizeable funds he has committed personally to the project. They wish to support the cause which has resonated and found an echo in theirs as well.

Pat has personally financed his entire journey and all funds contributed will be controlled by the committee of friends and used solely for the advancement of the bursary.

Those who wish to be associated with the bursary are invited to contribute to the Coastal Charity Challenge account in the Bank of Ireland, Parliament street, Kilkenny.