A century on, Kilkenny to reflect on a key historic moment 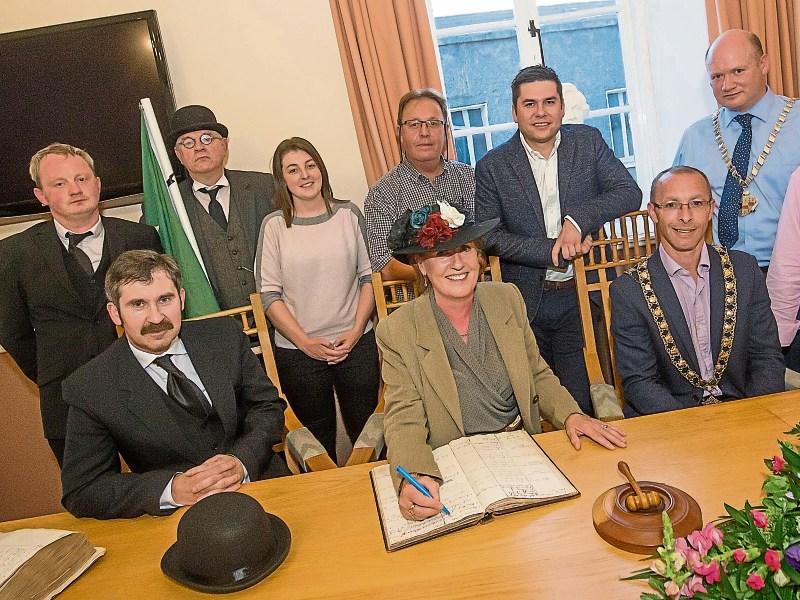 Local history combined wonderfully with some enthralling pageantry on Tuesday evening as another part of Kilkenny’s decade of commemorations began in City Hall.

Following the success of last year’s 1916 commemoration events, Kilkenny looks set to continue marking the milestones of the march toward the birth of the Free State — and this county’s role in it.

Re-enactors, local politicians, and curious onlookers joined forces with history enthusiasts and the familial descendants of those who played a role 100 years ago, when it was all very much in the balance.

Brian Tyrrell of Kilkenny County Council, who coordinated much of the 2016 comemoration events, welcomed everyone to City Hall for a launch last week.

“It was the start of a period that was seminal in Irish history.”

Mr Tyrrell said that the City Municipal District had decided to celebrate the 1917 Kilkenny by- election of WT Cosgrave. The event arises out of a Notice of Motion from Cllr David Fitzgerald to set up a sub-committee to organise commemoration celebrations of the historic event. WT Cosgrave was Ireland’s first Taoiseach per se, and Kilkenny’s first Dail deputy.

It was Cllr Fitzgerald’s great-grandfather, Thomas Crotty, who seconded Cosgrave’s nomination. He then went on to serve Kilkenny from 1917 to 1927, and was nominated to lead the Free State government after independence.

The plan now is to hold a full day of re-enactment, speeches, celebration and music on Saturday, August 12 to mark the occasion and spread awareness. On the morning, replica election posters of the two candidates, WT Cosgrave and Jack Magennis, will appear around the city.

Polling stations will open outside City Hall, manned by re-enactors in period costume. They will be handing out leaflets to passersby, encouraging them to vote for the candidate of their choice.

Posters, ballot papers and ballot boxes will be in place.

At noon, ‘Countess Markievicz’ will arrive at Kilkenny train station. She will be led by a colour party from the James Stephens Barracks and St Patrick’s Brass and Reed Band in a parade down John Street, High Street to outside the courthouse building on Parliament Street.

There, Markiewicz – along with ‘De Valera’, ‘Magennis’, and ‘Cosgrave’ – will make speeches and re-enact the hustings of a century ago.

A plaque will also be unveiled to commemorate the election of WT Cosgrave. It’s hoped a Cosgrave family member will be present for the occasion. The Tricolour will be raised and the national anthem will be played. A lunch will take place and polling will close later in the afternoon.

That evening, an event involving history, music and song will follow in the new Medieval Mile Museum, including further re-enactment, candidates’ speeches, a local history lecture, and a keynote address from Dr Ciara Meehan, Principal Lecturer in History at the University of Heretfordshie’s School of Humanities.

Actual speeches will be made, and the speakers will address the crowds. A member of the Cosgrave family will hopefully be present to unveil a plaque to the great man.

On Tuesday, Cllr David Fitzgerald acknowledged the presence of all in attendance, including members of the Defence Forces, and thanked, in particular, Brian Tyrrell for his work. Mayor Michael Doyle thanked all the committee for their hard work on the project so far.

“If this is anything to go by, it will be a fantastic event,” he said.