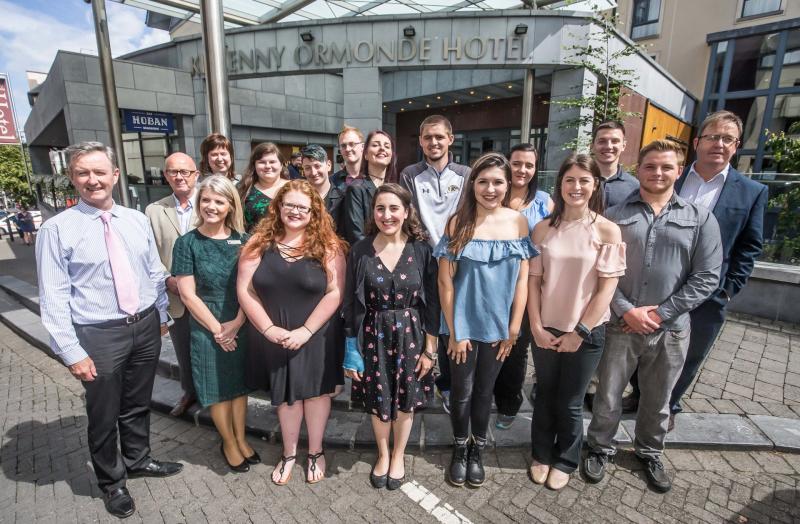 A group of business and finance students from Kent State University in United States paid a cultural and information seeking visit to Kilkenny last week as part of their twelve day educational and cultural tour of Ireland.

Part of their visit to Ireland included the meeting of different business organisations and those who had influence in drawing business to Ireland as well as creating employment. They spent the first four days of their visit in Dublin where they met representatives from IDA Ireland and also met people from the Guinness Enterprise Centre.

The visit to Kilkenny came about when this columnist had Kent State Professor Ludmila (Luda) Leontieva on a private group tour around Ireland in 2016. Luda expressed an interest in visiting Ireland with business students and  the wheels were set in motion.

The students met with Brian Tyrrell of Kilkenny County Council, Naoise Nunn Chairman Kilkenny Tourism and John Hurley CEO Kilkenny Chamber of Commerce at the Ormonde Hotel where they were informed of how Kilkenny City and County is so attractive to business and visitors. Brian Tyrrell told them that there were 16% of the workforce employed directly in the tourism industry and in 2015 it was worth €76 million to the local economy of which €45 million comes from overseas visitors. John Hurley spoke about the connection the Kilkenny Chamber link to education and direct links to IT Carlow and IT Waterford as well as the NUI Maynooth outreach campus in the City.

The students were very much taken by the huge Agricultural business based in the city and county and were familiar with Glanbia in particular and were told about Connollys Mills in Goresbridge who export to over 70 countries. This was to name just two companies who are flying the flag for Kilkenny.

John said that the Chamber interacts closely with Kilkenny County Council and Kilkenny Tourism and certainly Naoise Nunn concurred with that statement. Naoise said the role of Kilkenny Tourism is the promotion of the city and county and a lot of their involvement is with the large number of festivals and events that are held in the city throughout the year. The Kent State Students had plenty of questions in their armoury for the three gentlemen and they were suitably impressed with the answers they received. It was a hugely positive meeting for all and one that hopefully will be repeated. Later that evening a number of the party were interviewed on KCLR radio which was an enjoyable experience.

On Friday the group visited the Craft Council of Ireland Gallery at the Design workshops where Emer Ferran Development Programme Manager and Mary Whelan Client Liaison Officer who told the party the history and origins of the Craft Council and ho the student programme worked. Being Business students they were interested to know how artists can promote and market their product knowing that artists are not good marketers. This is one of the areas the student course helps them to become more creative in selling and promoting their product.

The Kent Students were shown around by in house student Yasmin Belkhayat who is completing her two years. She hails from London but with close Kilkenny connections. She explained how their talents are tested to the last and she said all the students have learned to become more creative with their talent.

Certainly their work is outstanding and will be on exhibition to the public until Monday next 7th August. Richie Windle of Kilkenny Ghost tours also came on board and the students ere taken around the city on a ‘scary’ tour on Thursday night. On their journey out of Kilkenny they stopped off for a visit to the Blessed Edmund Rice Heritage Centre at Westcourt Callan and later visit the centre of Callan to view the monuments to James Hoban, Edmund Rice and the World War 1 memorial. They departed Kilkenny with wonderful memories and wishing they had stayed longer in the city.

Perhaps this first visit will lead to many more.