'Cosgrave' and 'Markievicz' reel in the years in Kilkenny, and have us all enthralled

Performance in City Hall launches a day of events this Saturday, August 12 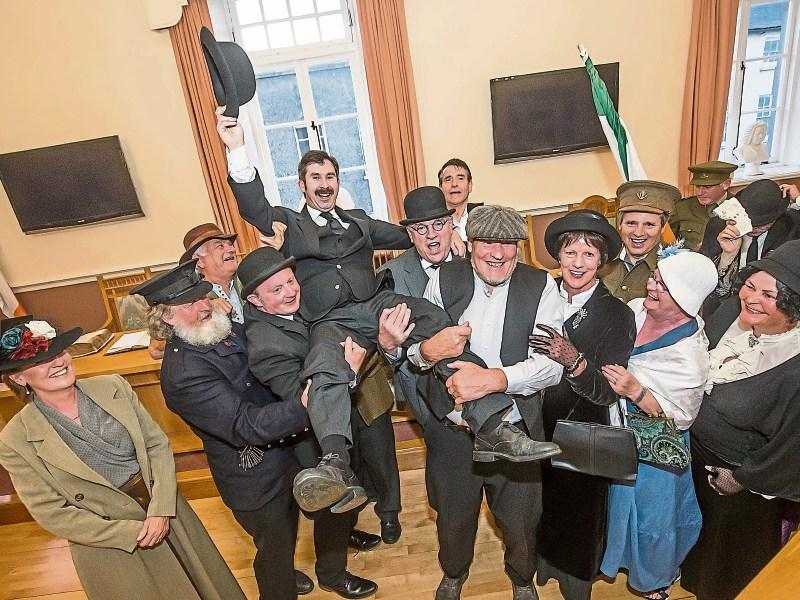 The hullaballo could be heard from inside the door of the council chamber at City Hall.

‘Cosgrave supporters’ had congregated, bedecked in their early 20th Century garb, outside in the foyer. They were vocal, and in bullish form.

‘The Countess Constance Markievicz’ entered first, followed by the boisterous Cosgrave coterie. Lying in wait at the other side of the door, 21st Century photographer Pat Moore was nearly run over as the group marched in.

“Put him in! Get him out!” The setup was outlined by a very real and in the flesh Michael Somers. To his right sat the impressively mustachioed ‘WT Cosgrave’ – here, we were told – seeking to run as our representative. To fill the vacant seat in the House of Commons in the Kilkenny City constituency, in this, the 1917 by-election.

Parliament Street baker ‘Tom Crotty’ spoke first, proposing Mr Cosgrave with a considered speech to rival any other oration heard in that chamber in the past ten years. His seconder was the venerable ‘ET Keane’, who established this newspaper in 1892, and served as its editor for several years — even as it was suppressed by the occupying British authorities.

With Cosgrave deemed nominated, he took the floor. He outlined the vision of a new Ireland. It was likely an Ireland that became something he never could have imagined, but it started out as they often do.

“Let us show the British Empire – and all empires across the world – the power of the ballot box,” he said.

When Countess Markievicz finally held court you could hear a pin drop. She talked of Cosgrave’s travails – the man who had ‘seflessly sacrificed himself in torturous battle in the recent rebellion in Dublin last year, and who has been a victim of the British Empire’s penal system’.

She said he had fought for those living in tenements and slums in the inner city.

Eschewing the 1920s dress code in favour of a fetching pink shirt, John McGuinness wondered if the result had been due to a number of ballot boxes ending up going over the side of John’s Bridge... He spoke about his family — and Kilkenny’s vital role in that moment of history.

A day of commemoration activities surrounding the 1917 By-election is to take place in Kilkenny this Saturday, August 12. For more, see this week's Kilkenny People.