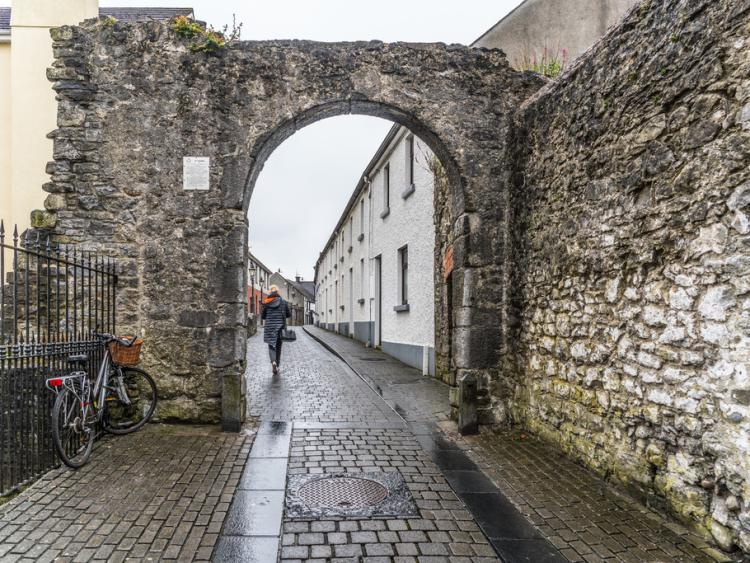 The last surviving gate of the city’s medieval wall is under threat.
A concerned local representative wants to close the street on which it stands to vehicular traffic before it is accidentally troppled.
The Black Freren Gate on Abbey Street is a historical and architectural gem with cars driving within inches of it each day.
Green Party councillor, Malcolm Noonan feels it is time to stop the ‘madness’.
From this site, you can see straight over to St Canice’s Tower and Cathedral and it gives you a sense of the importance and location of the old City Wall.
Cllr Noonan was spurred into action by the decision of Drogheda local authorities to close off a similar gem, St Laurence’s Gate in the medieval heart of Drogheda .
“We are tempting fate here, a hit from a car could do irreparable damage,” he said.
Cllr Noonan said the gate was the only surviving Norman Gate into the old city and was of International importance. He said sections of the old wall had been lost due to past developments on Abbey Street.
He feels remedial work can be done relatively painlessly with a right turn only out from the apartments on the upper side of Abbey Street with some additional signage and a 'holding bay' to allow oncoming traffic the opportunity to wait for cars leaving the car park.
“It is my view that Abbey Street should be used for local access only,” he said.
“We now have the chance to join some more dots with Evans Turret now coming back into public realm.
“I will be bringing the matter forward at the September committee meeting of Kilkenny Municipal District and I hope that we can advance plans not just to protect Black Freren Gate but enhance Abbey Street with interpretative signage and improved lighting.
“It will benefit all who live on the street, creating a pedestrian and cycle friendly portal up towards the Black Abbey and Blackmill Street,” he suggested.