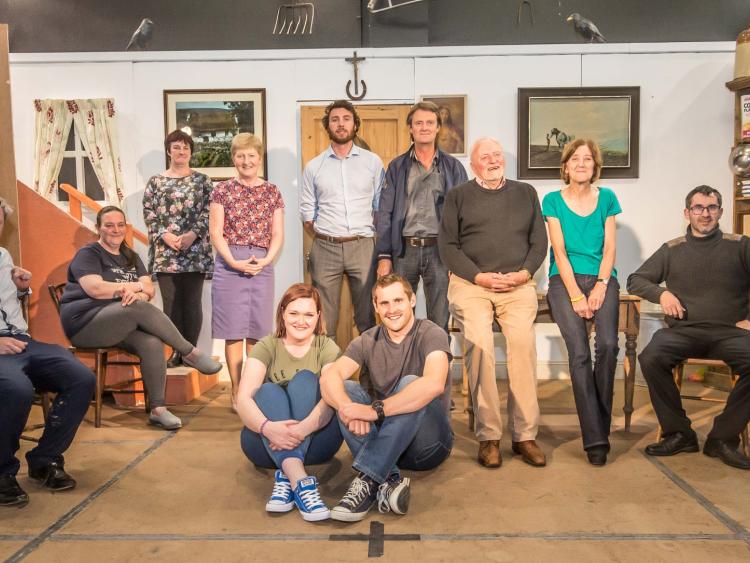 The cast of Lovers 'Meeting' rehearsing in Thomastown

Moonlight Theatre group is the first amateur dramatic theatre company to have been established in the city and county for a while and is a welcome addition, giving a voice to playwrights and actors and giving directors choice dramas to interpret.
Formed by well known drama director Michael Casey, Moonlight Theatre's first play brings together some of the most experienced drama personnel in Kilkenny and Carlow.
This first production is a revival of one of Ireland’s greatest plays, Louis D’Altons “Lovers Meeting”.

It will be staged in the Concert Hall, Thomastown on Thursday, September 14, Friday, September 15 and Saturday, September 16.
Director, Michael Casey read the play a number of years ago and felt it needed to be performed now because of what is happening in society today.
“The play is about many things but it’s primarily about mental health,” the Cork man said.
“To put the magnitude of this play to local audiences former director of the Abbey Theatre Vincent Dowling placed Lovers Meeting in his Top 10 of Irish plays,” Michael disclosed.
“It’s simply a pure raw piece of theatre, something we don’t see much off,” he added.
The setting of the play is rural Ireland and centres around Mary Sheridan (Maggie Cooney) an innocent young country girl falling in love with handsome young wild neighbour Joe Hessin (James Nolan).
True love
It's true love for both. Her mother (Francis Sweeney) is adamant the marriage cannot take place, but father (John Whitely) sees the boy and girl are truly in love.
Aunt Hannie (Ann O'Rourke) who lives with them, sides with the lovers as she waits in hope herself for decades for her lover who went away to come back.
This seriousness is interspersed with great true comedy and characters of uncles, aunt, and close neighbours.
Making his debut in this play is Willie Duggan who plays the drool Sgt Toolin.
First produced
When Lovers Meeting was first produced by the Abbey in 1941 it was extremely controversial.
What’s more interesting in an era where we feel today that these issues were taboo many were not afraid to take a stance.
Louis D’Alton was just one of many. The directors at the time in the Abbey felt that the play did not reflect metal health issues.
However, in the 76 years since society has learned that mental health exists in many forms. It is up to us to identify them and show support.
Michael Somers who is playing Batt Seerey in the play said; “in my role with the Rural Youth Committee in Macra na Feirme we started many initiatives in relation to mental health.
The green flag, workshops and bringing in various speakers to speak to members,” Michael said.
Michael is an experienced actor in his own right having performed on the All-Ireland circuit many times.
Willie Ryan, plays the part of Mossie in the play said; “the play is no doubt challenging”.
Clare Post who recently played the part of Mena Glavan in John B Keane's Sive plays Aunt Francis spoke in high praise of the drama.