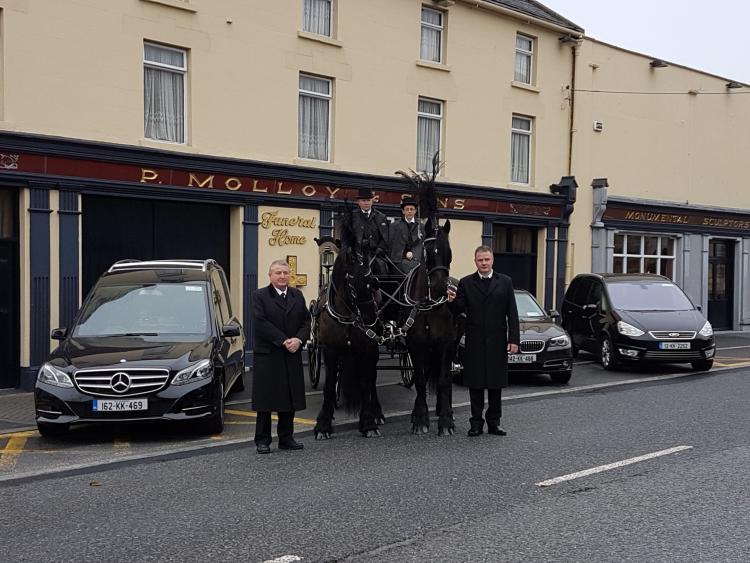 Molloy’s undertakers was founded the same year as Liverpool soccer club and the Callan business is still providing a professional service 125 years on.

Molloy & Sons Funeral Directors and Monumental Sculptors is a family run firm and have been serving people all over Ireland and Kilkenny for the last four generations.

Patrick Molloy started the business in 1892 in Callan and Dungarvan in Waterford.

The business was continued by his sons Miko and Paddy. Patrick Molloy’s grandson, Pat Murphy, together with his wife Breda, daughter Elaine and son-in-law Tommy continue to deliver the same standard of service as that of previous generations.

Speaking to the Kilkenny People, Tommy, an ardent Liverpool supporter, says the service must be professional and sensitive at all times.

He said: “The funeral side of it is very sensitive.

“We have been providing professional, sensitive and courteous services to bereaved families over the years. We have supplied monuments to families in Ireland and abroad.

“We have shipped headstones to Australia and New York. We’re involved in the Kilkenny War Memorial to be unveiled next year.”

The showroom in Callan has over 60 headstones on display as well as grave accessories, chippings, plaques, bibles and statues.

He added: “You get all sorts of requests for headstones. There’s nothing we won’t do.

“People look for them with a sporting or an animal background with dog features included depending on the person.

“It is skilled work, we buy in our own stone and we carve it, we hand-cut letters as well. All of these skills are dying out.”
Molloy’s began over a century ago and Tommy says the tradition has continued over the years and the skills have been passed down through generations.

“I’m here 12-15 years. I married into the company. Pat himself is a stone cutter and two men in the yard are too. Anything can be done, any kind of a special headstone can be commissioned.

“The business formed the same year as Liverpool FC and it’s going as strong as Liverpool,” he said.

Molloy’s offer a range of other services that include: cremations, funeral/mourning cars, eco-coffins and arranging ceremony music.