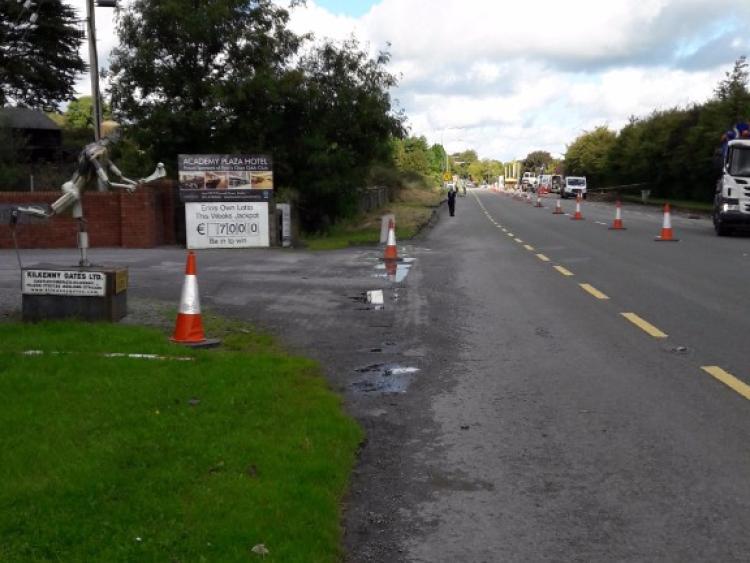 The N78 showing the entrance to Erins Own GAA club

Calls have been made for public lighting to be extended on the N78 from Ballyhemmon down to the GAA grounds at Ballycomey.

A recent meeting of Castlecomer Municipal District heard that many children use the road “two or three times a week” and public lighting is necessary there to avoid an incident.

Castlecomer Labour Councillor, Maurice Shortall, said: “Priority should be given to extend the public lighting from Ballyhemmon, Castlecomer to the Erins Own GAA Grounds at Ballycomey.

“This particular section on the N78 is extremely busy and is presently benefiting from a €664,000 overlay including the provision of footpaths.

“Erins Own cater for boys and girls teams from U-5 to U-16 with approximately 30 on each panel.

“I am requesting that we make provision to include this section in the Public Lighting Programme 2018 for a number of reasons.”

He added: “First of all, safety given the volume of traffic on the road and secondly with the provision of footpaths it would encourage both adults and children to avail of the connectivity by way of an exercising walk.”

Director of Services, Simon Walton, told members that there are 10,000 public lights in Kilkenny and it is an “ageing stock”.

Members set aside around €1.2million to manage and maintain the lights with electricity costs alone coming to €750,000.

He said: “There are calls for public lighting throughout the county and we’ve an ageing stock.

“Maybe these requests should be considered on a priority basis.

“For a number of years, no additional public lighting was being provided and now there are additional lights.”

Works began earlier this month on overlay works on the N78 from Dysart to the Golf Club Entrance, Castlecomer.

They will consist of a structural overlay of the existing carriageway along with drainage and footpath/kerbing improvements.

Motorists are also advised that a new speed limit is in place for the duration of the works.