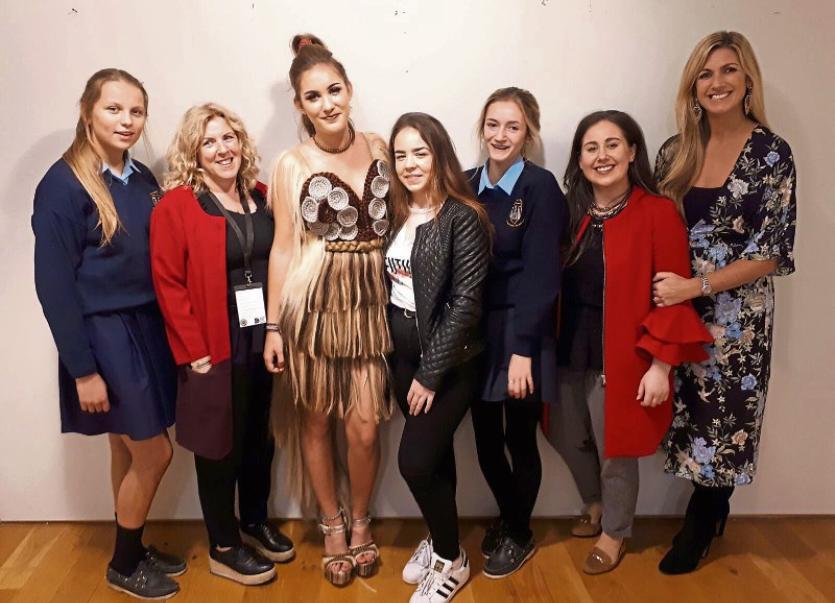 The group pictured with Karen Morrissey

‘Hair Dress Her’ was one of the finalists of the national competition, which took place at Dublin’s 3 Arena. The outfit, made from recycled hair extensions and hair cuttings, was the result of a lot of hard work by some very dedicated students.

Recently, Culture Night was celebrated around Ireland. Kilkenny had a number of activities on throughout the day, one of which was a Junk Kouture Fashion Show at sunset at the beautiful Castle Yard.

The event was organised by National Design and Craft Gallery, with Joan Brennan co-ordinating the event. Kilkenny City Vocational School students Sharon McGorrian and past pupil Courtney Dwyer, who designed the dress, had a Junk Kouture reunion. Transition Year student Judit modelled the dress on the night.

Around 4,000 students nationally entered the competition earlier this year, where ‘Hair Dress Her’ beat some very stiff competition to place third nationally on public vote. This success was recognised when the team were invited to celebrate Culture Night.

The students were interviewed by MC Karen Morrissey on the night. Moreover, the highlight of night was yet to come as students realised they had made RTE News, basking in delight with their five minutes of fame.

Courtney, who is now in her first year of college in Waterford, and Sharon, now a fifth year student diligently studying for her Leaving Certificate, have begun mentoring other students in school to prepare for 2018 competition.

Well done to all involved.