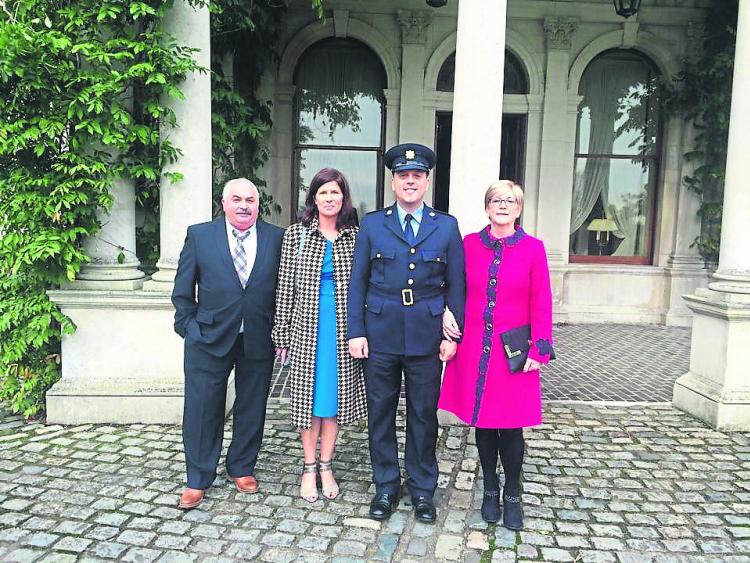 Garda Mark Holden at the bravery awards with his wife, Mary and parents Tommy and Breda

Writing in the Callan Notes in this week's Kilkenny People, John Stapleton said:

The work and duties of the members of An Garda Síochana can very often go unnoticed and most of those women and men in the force would prefer if that was the case.

But situations do arise when members face very difficult situations and often risk their lives in the line of duty.

To be recognised for duties carried out is a great honour and that is exactly what one Callan native received recently. Mark Holden, who is based in Clonmel, has shown that he is prepared to risk his life in the line of duty and for that he has been recently honoured along with three of his colleagues for their bravery.

They were on patrol in the Clonmel region on 13th July 2012 when called to an incident. On arrival, they observed that a single vehicle had collided with a tree side-on.

The sole occupant was trapped in the vehicle and the petrol tank on the vehicle had caught fire. Passing people had gathered at the scene and were attempting to put the fire out with water and fire extinguishers.

The attending Gardaí took command of the incident and made valiant efforts to free the trapped driver. The aforementioned Gardaí entered the vehicle while it was ablaze, the fire now coming from the front of the vehicle.

The fire was brought under control by the Gardaí. They made attempts to free the driver by towing the vehicle away from the tree but such was the impact it took fire services cutting equipment to release the female passenger.

She was removed to hospital where she made a full recovery. Mark received his award alongside Garda’s John Hennessy, J.P. O’Sullivan and Alan Hayes from the Ceann Comhairle Seán Ó’ Fearghaíl in recognition of outstanding acts of bravery at a national ceremony in Farmleigh House last Friday and present were his wife Mary and proud parents Breda and Tommy.

This is not Mark’s first time to be honoured for acts of bravery.

In November 2016 Mark was honoured for his bravery in rescuing a man in August 2015.

Along with 3 colleagues they were called to an incident where a man had fallen into the river. Garda Mark Holden and one of his colleagues, Sergeant Kieran O’Regan, entered the water to reach the man.

The four Gardaí managed to bring the man to safety and waited with him until emergency services arrived to the scene.
Mark feels very honoured to have received recognition for the second time and said it is all in the line of duty.

Mark’s a quiet fellow and loves life living in the little Tipperary village of Cloneen with his wife Mary who hails from Ballingarry and children Daniel, Ellen and Lucy.