Barnstorm and Watergate Theatre collaborate with
Plough and the Stars 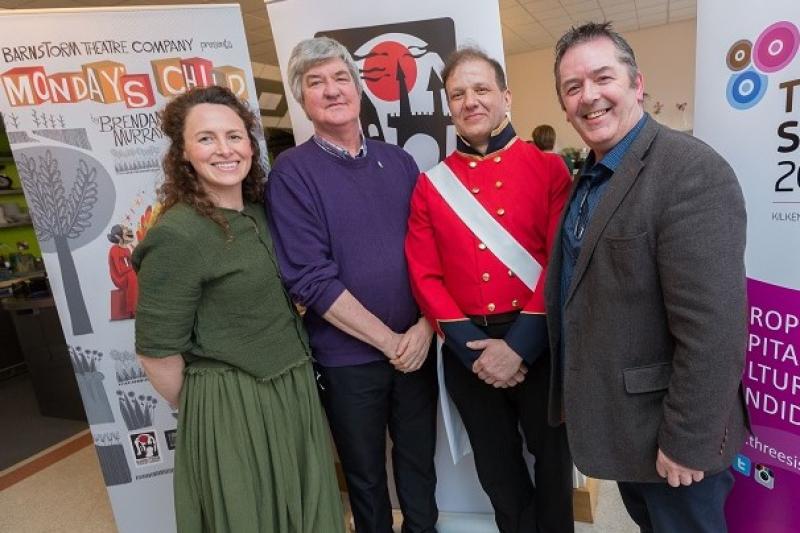 At the opening night of last year’s barnstorm-Watergate co-production of Translations with Muireann Ryan, Ger Cody of the Watergate, Jim Carroll and Philip Hardy from Barnstorm

Last year, to celebrate 25 years of making theatre, Barnstorm Theatre Company developed a number of partnerships to bring new theatre experiences to Kilkenny.
One was with the Kilkenny Arts Festival to produce a family season of theatre during their festival in August. It proved a huge hit.
Another was with the Watergate in a venture to serve post-primary schools by producing the ‘Curriculum Play Live’, offering students the opportunity to see the play live .
First up in 2016 was Brian Friel’s Translations, which had a huge, positive reaction from schools and the public.
This year the partnership continues with another Irish classic The Plough and the Stars by Sean O’Casey, from Wednesday, November 29 to Saturday, December 2.

In 1993, the Watergate Theatre was opened and Barnstorm was the first professional theatre company to tread the boards that March. The venue hosts over 200 shows annually. Last year the Watergate attracted audiences of 25,000 while over 10,000 have participated in shows by Watergate Productions.
The theatre provides a cornucopia of delight as an eclectic mix of professional, amateur, community, dance and school groups avail of its facilities.
It is noticeable that community and school groups from the city and county are anxious to perform on that stage.
Nationally, The Watergate is recognised for its excellence and is a much sought-after venue for touring groups.
In the last 26 years Barnstorm has achieved recognition as Ireland’s leading producer of theatre for young audiences, performing work locally and touring nationally and internationally. In recent years, and with the support of Culture Ireland, the company has toured North America, Australia and the UK. 2018 will see national tours of two productions, as well as a Barnstorm play touring to Spain.
Barnstorm has collaborated locally and internationally to create world premiere plays for young audiences. Next Spring Barnstorm will launch another world premiere with a play directed by Martin Drury, the founding director of The Ark – A Cultural Centre for Children in Dublin, and written by Brendan Murray, who was the author of the widely acclaimed 2014 production of Monday’s Child.
Performances of The Plough and the Stars will run from Wednesday, November 29 to Saturday, December 2; nightly at 8pm with schools performances at 10.30am on Thursday and Friday. Further information from watergatetheatre.com