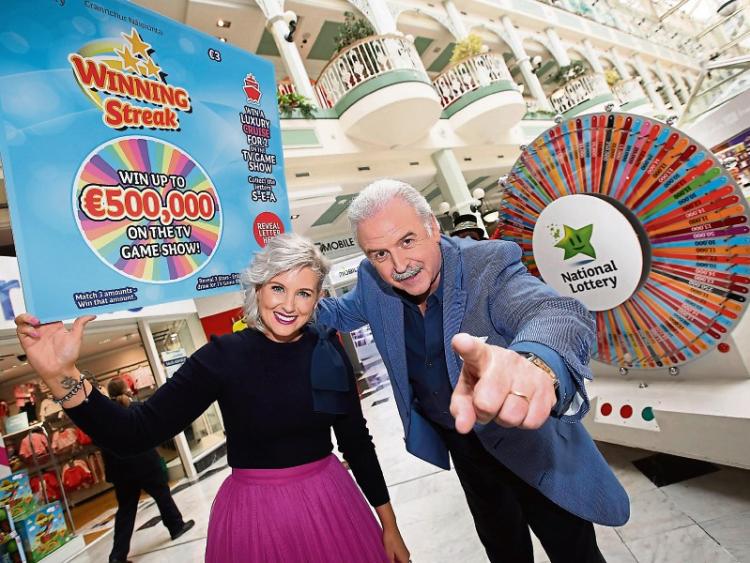 Winning Streak is on this weekend

Kilkenny man Paddy McGinty nearly fell off his seat laughing when his name was pulled out of the drum to appear on the popular National Lottery RTE Winning Streak Game Show this weekend.

The Castlecomer man had a good chuckle when Winning Streak host Marty Whelan made reference to the famous song “Paddy McGinty’s Goat” after his name was called out.

“I will have to buy a goat now with my winnings,” he joked.

Paddy, 47, is originally from Donegal and comes from a large family who will all travel to Dublin for the show.

They include his mother Patricia, six sisters Mary, Grace, Catriona, Dympna, Jean and Patricia, and two brothers James and Dermot. He will also be joined by daughters Grace and Shauna in the audience.

As well as enjoying a game of cards, Paddy is a Gaelic Football coach for Spink GAA club in Carlow and it was two members of the ladies team he coaches who bought the Winning Streak scratch card for him to say thank you at the end of the season.

The next episode of Winning Streak will be broadcast next Saturday evening at 8:15pm on RTÉ One, where presenters Marty Whelan and Sinead Kennedy will guide five players through the iconic show, which gives them the chance to win cash, cars and luxury holidays.

One will get the once-in-a-lifetime chance to spin the Grand Prize Wheel with a maximum prize of €500,000.

The other four players chosen to participate in next week’s Winning Streak are: Barry Murphy from Castleblaney, Monaghan, John Furlong from Enniscorthy, Wexford, Patricia Phelan from Mountrath, Laois and Marian Potter from Oranmore, Galway.

The popular game show first appeared on our screens way back in September 1990 and since then a massive 5,840 people have taken part, winning in excess of €165 million in prizes.

Almost €2.5 million alone was won in prizes on the past season of Winning Streak.