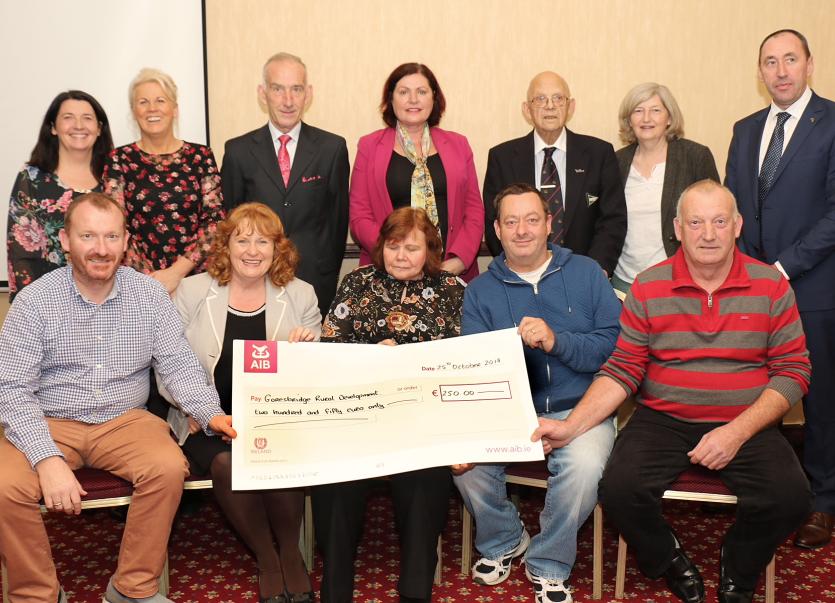 Goresbridge in Kilkenny scooped two awards in the annual Barrow Awards Scheme 2017 announced at a special ceremony on Wednesday, October 25.

Winners of the overall short-term prize category in 2016, this year they secured the bio-diversity award along with the title of Best in County Kilkenny.

The Barrow Awards Scheme rewards towns and villages along the River Barrow for maintaining and enhancing the natural resources of the river,

It also encourages communities to develop more amenities for the enjoyment of all river users.

The 2017 Awards were organised in co-operation with the local authorities in Carlow, Kildare, Kilkenny, Laois and Wexford and Waterways Ireland and were held in the Seven Oaks Hotel, Carlow town.

Goresbridge had a special focus on bio-diversity this year securing an ecologist to complete a report on the habitats of the area, which was fittingly recognised by the judges in awarding them the bio-diversity prize.

Other projects included the erection of a flora information board and completion of a very attractive fairy trail and wall mural.

New signage highlighting the entrance to the River Barrow was also secured which was commended.

The bio-diversity action plan notes a whole series of initiatives to be completed in the People’s Park and the Goresbridge Wildlife Garden.

There was also recognition for advising of the importance of tackling the invasive plant species Himalayan Balsam and undertaking work in the grassy verges and banks.

The implementation of many projects in this area are already underway.

Arthur Keppel, President of Barrow Branch of the Inland Waterways Association of Ireland, said “a lot of fantastic work is being carried out by entrants on a daily basis along the River Barrow for the benefit of locals and visitors to the area”.

He added: “Having events like the Barrow Awards Scheme is a way of saying thanks and recognising groups for their trojan and continuous efforts which so greatly enhance the appearance of the river.”

Highlighting the Barrow as one of Europe’s most magical waterways, Cllr John Murphy, Chairman of Carlow Tourism noted the level of inter-agency co-operation in the delivery of the awards and its significant, “yet untapped tourism potential”.

He noted that Carlow Tourism were delighted to run the awards as a means of encouraging ongoing development and promotion of the river.