Column: Dogs enrich our lives by providing great company but mine’s a bitch 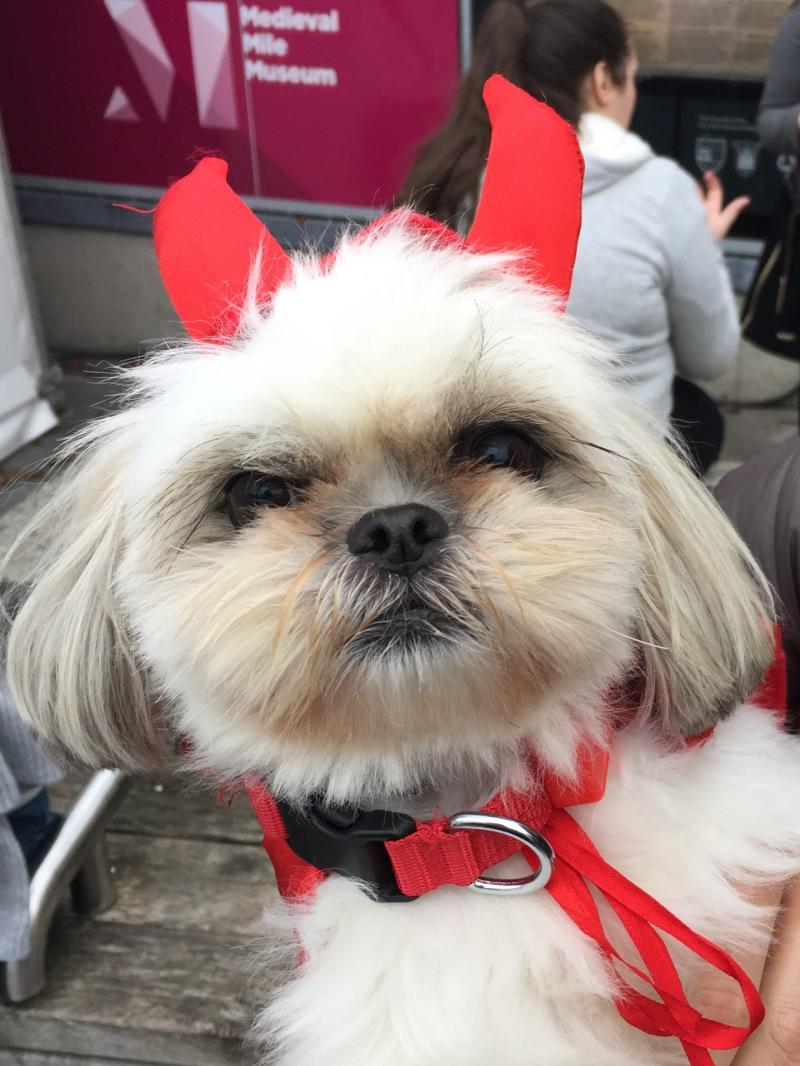 Sophia - the Shih Tzu I brought home from South Korea after my girlfriend and I finished teaching out there - is a walking bitch...as in she’s a female dog.

The glamorous canine (pictured) is wearing her Devil outfit that she wore to the Savour Festival this year where she gobbled on Churros and pizza.

This is one of many outfits she has, there’s also the Kim Kardashian sweatpants which were purchased in Japan; her flowery dress; a woolly hoodie and I think there’s a pirate outfit in the cupboard somewhere.

As pets go, Sophia really takes the biscuit. But don’t all dog owners say things like that?

This Shih Tzu though; she gets groomed in Clontarf roughly every two months, roughly.

It also means that we have to wait two hours in the car for her to get clipped, washed and blow-dried before heading back home with her.

She sleeps in the bed with us, under the covers, between either my legs or my girlfriend’s legs. If she’s not there, she’s on a pillow, taking over the pillow, and we’ll foolishly sleep on a little corner of it.

Sophia tries to inflict psychological trauma on us too across a range of circumstances. She has a way of making herself really small and vulnerable - especially if she knows we’re leaving.

So, we took to breaking up a treat - they’re called Whirlers - around the house for her every time we left, now she’s come to expect it.

I can’t tell you how many mornings I’ve left the bedroom to go wash my teeth and she’s feigning sleep under the duvet, just this little lump.

I’m ready for work and she knows by the commotion that I’ll be leaving soon. Anyway, she’s just a mound in the bed, I go to the bathroom, I’m brushing my teeth and I look in the mirror and I can see her in the hall behind me, looking straight at me.

She’s like a ninja wandering around the house and carpet only improves her stealthiness.

My girlfriend is convinced that when she lies across our necks she’s not cosying up to us; but is instead trying to kill us or figure out how to.

She’s got an insatiable appetite too. She will literally eat anything and she usually gets a small plate of what we’re having.

She understands certain words too, they include: Boherlahan (the village where I’m from), walkie and of course, chicken.

These words cause an obligatory head tilt and an inquisitive look or lick, depending on where she is. She spends most of her day trying to manipulate us to feed her or play with her, but there’s nothing we can do, we’re hooked. We love her.

On one occasion we left her with my parents for two days. When we came back she had a limp and I said to my father, “What happened the dog?” and he replied: “Nothing, she was fine two minutes ago.”

She put on the limp to make us feel bad for leaving her; we imagine. Within five minutes she’d forgotten she was supposed to be limping.

Another time we left an opened bag of Hunky Dorys folded up one night on the table, it was a low table. We went to bed, as did Sophia. Everything was normal.

The next morning, we got up and there wasn’t a grain of salt left in the packet. Despite all these things, we adore her. She’s the greatest thing to have come into our lives and she has enriched them no end.

The story of Snipe in this week’s Kilkenny Life warmed my heart. It was great to chat to Phyllis when she called into the office last week with her pictures and to hear her remember a pet dog from over six decades ago so fondly. That’s the lasting impact pets can have on our lives and it’s wonderful.