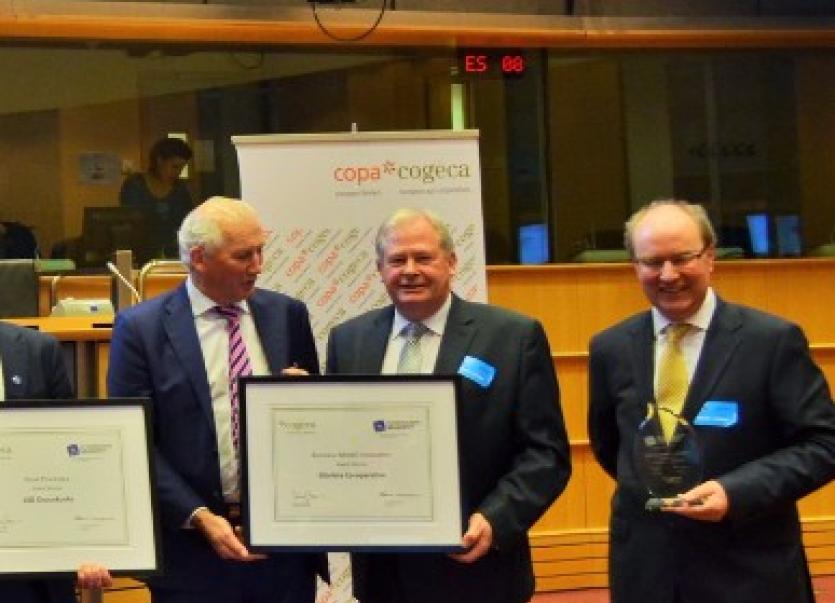 A Glanbia initiative to provide farmer/suppliers with flexible loans has won a major accolade.
The Glanbia MilkFlex Fund won the innovation award at the 2017 European Awards for Co-operative Innovation, presented by COGECA, the Association of European Agri Co-operatives, in Brussels.
The MilkFlex Fund offers Glanbia milk suppliers loan repayments which vary according to seasonality and movements in milk price.
The purpose of the Glanbia MilkFlex Fund is to provide Glanbia milk suppliers with an innovative funding product to support investment in on-farm productive assets (including livestock, milking platform infrastructure and land improvement).
Henry Corbally, Chairman of Glanbia said that since its launch in March 2016, the fund has encouraged renewed debate on the development of innovative funding products for farmers which is positive for the overall sector and to be welcomed.
“Since its arrival on the market in May 2016, the Fund has received more than €90 million in loan applications.
“The average value of MilkFlex loans drawn from the Fund is €100,000 to date,” Mr Corbally pointed out.
A key feature is that it has an inbuilt ‘flex triggers’ that adjusts the repayment terms in line with movements in Glanbia Ireland’s (GI) manufacturing milk price and seasonality, thereby providing farmers with cash flow relief when most needed.
Receiving the Award, Sean Molloy, Director of Strategy and Supply Development at Glanbia Ireland highlighted the support of partners - the Ireland Strategic Investment Fund, Rabobank and Finance Ireland - in bringing the Glanbia MilkFlex Fund to market.
“It is a valuable tool in assisting dairy farmers to manage income volatility, which is particularly challenging for family farms everywhere,” he said.
Cogeca President Thomas Magnusson said he was delighted with the quality of the award recipients in 2017.
“These awards aim to promote practices and innovative solutions designed by co-operatives. Since 2009, Cogeca - the voice of European agri co-operatives - recognizes and celebrates the outstanding innovation practices of European agri co-operatives,” the chief of the giant EU wide co-op.