Lauded: The initiative has been described as a great idea and gives families ‘peace of mind’ 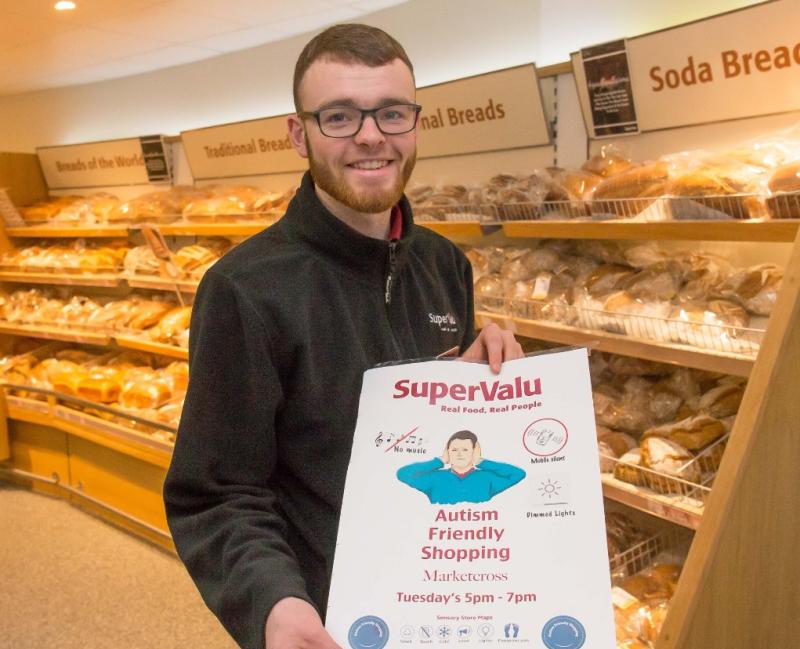 Design: Ben Tynan with the poster he designed to promote Autism Friendly Shopping at SuperValu in the Market Cross Shopping Centre in Kilkenny. The idea received “positive feedback”.

Supervalu in Kilkenny offers Autism Friendly Shopping every Tuesday between 5pm and 7pm in what has been described as a “great idea” and a wonderful community initiative.

Kevin Aylward has been working at Supervalu in the Market Cross since April of this year but says the whole idea for Autism Friendly Shopping began when he was in a Waterford branch of the franchise.

He said: “We started it when I was in Waterford where I was for eight years. There was a woman working in the deli whose son was autistic and that’s where the idea came from.

“I started in Kilkenny in April and the idea caught on in the company and we rolled it out here.”

SuperValu has Autism friendly shopping evenings already happening in just under 40 stores around the country.

Then there are photos of the store for families and those with Autism to visualise the store trip before they visit.

Loud noises, bright lights and crowded spaces can be challenging for people with autism.

Kevin said: “We basically remove any unnecessary noise, we turn tills down, check-out barriers are left open, lights on the fridge are turned off.

“We’d take all cages off the floor, no clutter. Just clear, easy shopping.

“People take their keys off their hips so there’s no jingling, nothing loud. Staff turn their phones on silent, staff in the bakery are careful taking in trays. The feedback we got is very positive. The quieter the better. We wouldn’t notice people coming in.

“But it’s a great idea and it’s not to drive sales or anything like that. My own cousin is autistic, the hassle they go through going shopping. The Autistic Friendly Shopping gives them peace of mind.”