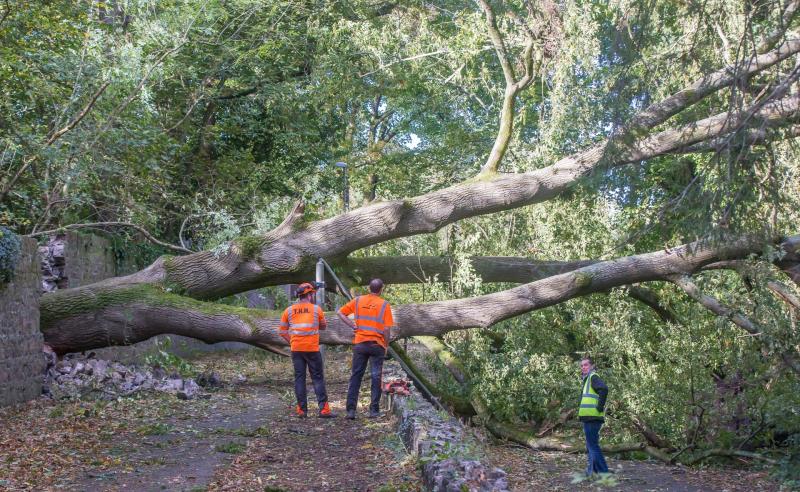 Storm winds of almost 120km/h uprooted trees and hurled garden furniture about like children’s toys as the ex-Hurricane Ophelia unleashed its fury on Kilkenny this month.

Over 200 calls were made to the Council’s dedicated phoneline for storm-related issues and the morning after the storm Kilkenny awoke to find no fewer than 60 roads blocked or obstructed by fallen trees and debris.

Meanwhile, Woodstock Gardens in Inistioge would remain closed to the public for a period of time due to the damage sustained there.

Repairs required tree surgeons and were expected to cost at least €25,000.

One of Kilkenny’s most well-known pubs, the Bróg Maker, on the Castlecomer Road, was bought by the Council for the provision of social housing.

Chief Executive of Kilkenny County Council Colette Byrne confirmed to local councillors that the premises had been purchased by the local authority for a sum of €850,000.

Tributes were paid in Kilkenny as family and friends mourned the passing of well known local artist Ross Costigan.
Ross was a talented actor, photographer and film maker.

He will be remembered for his creative flair, his individual spirit and his kind and sensitive nature.

In other news this month, Kilkenny County Council paid €160,000 on internet and WiFi costs over the last five years across its buildings including Town and County Hall.

Meanwhile councillors hit out at motorists parking on footpath kerbs in towns and villages across Kilkenny with some people's behaviour likened to King-Kong.

The local authority have gone to great lengths to make the city navigable for those who are blind or visually impaired but a well-known stalwart of the local community said it still boils down to a person’s attitude.

Tom Kennedy, who is blind, works for the local authority and is a fitness enthusiast, he said things have improved dramatically in Kilkenny City for those who are blind or have difficulties seeing.

Twenty-three people had a lucky escape when the bus they were travelling in went on fire.

The fire took place at Templemartin on the outskirts of the city at approximately 11pm.

Gardaí and Kilkenny Fire Service attended the scene and all 23 occupants were safely removed from the burning vehicle.