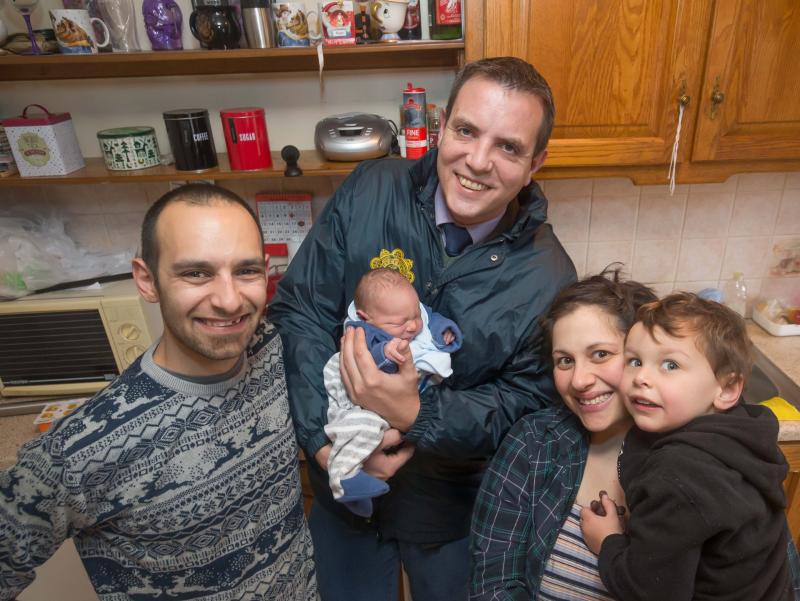 An undercover detective went beyond the call of duty this month when he helped deliver a newborn baby in Kilkenny.

Detective Garda Shane Elliffe was on duty and carrying out a search under warrant of a property in the New Building Lane area of the city when he met Andrea Merli who asked him for help.

“There was a search taking place targeting criminal activity in the area when a man approached me looking for help.

“I went with the man to his home and met his wife who was on the stairs in their hall and in the process of giving birth,” said Detective Garda Elliffe.

His wife Nadia was in the advanced stages of labour and her husband had ran down the street to hail a taxi to bring her to St Luke’s Hospital when he met the garda.

“Detective Elliffe went to the property and found a lady in distress on the stairs.

The labour was well advanced and Detective Elliffe proceeded to help deliver the baby boy and keep him safe and warm until the paramedics arrived a short time later,” said Superintendent Derek Hughes.

Kilkenny County Council’s insurers paid out over €1.6 million in settled claim cases since 2014 with one of the the main causes relating to “slipping or tripping” and settlements have been steadily increasing each year.

The information was obtained following a Freedom of Information request by the Kilkenny People with details of the claim cases settled split into “motor, public liability and property”.

A Kilkenny couple who serenade each other every morning, celebrated their 70th wedding anniversary at the weekend.

It marked the first time in living memory that anyone from Graignamanagh celebrated their ‘platinum’ anniversary.

Tom Holden is 91 years young and his wife Bridie is 89.

And it proved nearly impossible for well-wishers to get a card for a 70th wedding anniversary.

Willie Meighan, owner of Rollercoaster Records on St Kieran Street passed away this month. The wonderful, joyous, happy-go-lucky owner of one of the country’s few independent record shops passed away at the age of 48.

Willie was surrounded by his family and by the love of his life, his wife of just a few weeks at the time of his death, Aisling Hoy.

Over 1,000 people packed into St Mary’s Cathedral, Kilkenny for his funeral Mass. His close friend, Malcolm Noonan, managed to capture the essence of Willie’s underlying love of people, music, his tolerance and his highly principled ideals of always doing the right thing.

In other news this month, it was revealed Kilkenny has just two emergency ambulances on duty each night for its population of 100,000 people, the Kilkenny People revealed this month.

The information was obtained following a Freedom of Information request which sought a breakdown of the availability of ambulances in Kilkenny on a 24-hour basis, seven days a week.

A bunny beggar was told to hop it in Kilkenny. A beggar who travelled to Kilkenny with his rabbit to ‘get a bit of money’ was ordered to stay out of the city.