Concern over list of 'responsibilities' issued to council tenants in Kilkenny

They include draught-proofing, repairs to internal plaster cracks, and repairs to external and boundary walls 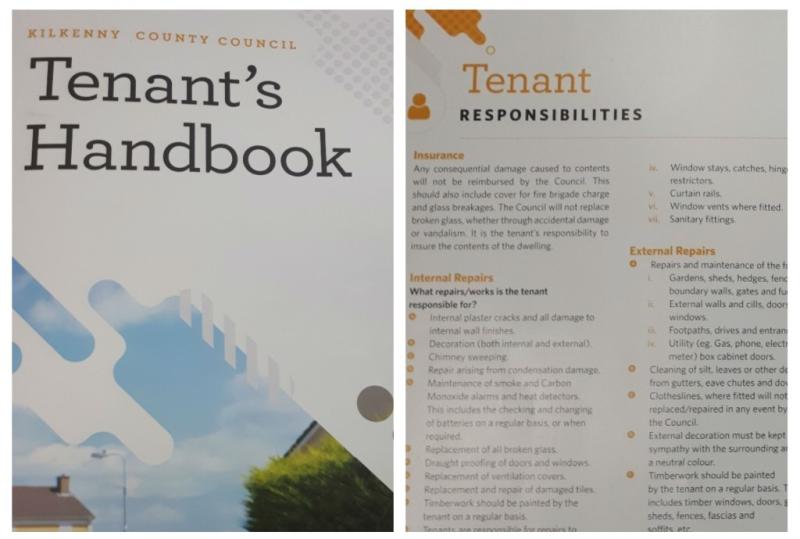 A list of ‘responsibilities’ issued by Kilkenny County Council to its housing tenants last week has sparked some concern among local residents.

A new ‘Tenant’s Handbook’ came through the letterbox for council tenants early in the new year. The document sets out one page devoted to council responsibilities as landlord, and two full pages of tenant responsibilities.

While most of them are standard, several have caused some concern. A number of city residents, some of them elderly, have contacted their local councillor as well as this newspaper, worried about their obligations as set out.

Internally, these include repairs to internal plaster cracks, and the draught-proofing of doors and windows. Externally, tenant responsibilities also include repairs and maintenance of fences, boundary walls, gates, footpaths, and the cleaning of silt and leaves from gutters and downpipes

One local councillor, Patrick McKee, says he did not get to see the document before it was issued. He says he has ‘significant concerns’ around some of the wording therein.

“It portrays a fundamentally different relationship between local authority tenants and Kilkenny County Council than I thought existed,” he told the Kilkenny People.

“While the standard of local authority homes is generally very good, since the publication of the new tenant handbook I have been contacted by tenants who are concerned about the state of repair in some local authority houses. They now believe it is their responsibility to repair and make right things which any landlord would be expected to repair and make right. It has caused worry and confusion.

“I will be seeking clarification and answers at the next meeting of Kilkenny County Council and I hope my concerns can be addressed, and that the best interests of our tenants is the primary concern of all of us.”

Additionally, in a letter accompanying the updated Tenant's Handbook, director of housing Mary Mulholland advises tenants that a rent review is to take place in the first quarter of this year. It will be effective from a date to be agreed in Quarter 2.

“It came as a complete surprise to me that the local authority intended carrying out a rent review in the coming weeks,” said Cllr McKee.

“In my view the timing is completely wrong.”

The council says it will be in contact with tenants again to request their income details.