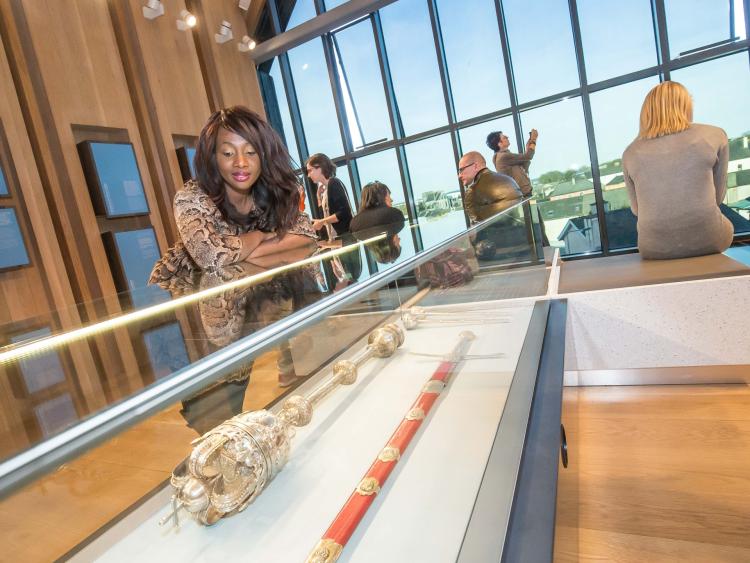 The mace and sword in the Medieval Mile Museum in Kilkenny City Picture: Pat Moore

There is outrage over Kilkenny County Council needing “permission” to get a historic mace and sword that have been in the possession of Kilkenny people for hundreds of years.

The mace and sword that were always on display in City Hall, and symbolic in terms of the city status, have been given to the Medieval Mile Museum to be displayed.

Cllr Andrew McGuinness said: “It was always my understanding that we would always have access to them to be used for civic occasions as we have done for generations.

“Events such as St Patrick’s Day, the annual Christmas service at St Canice’s, Freedom of the City events etc.

“I asked the question would we have them for the Christmas service at St Canice’s as we always do. The answer I was given was no, it’s too short notice to get ‘permission’ from the museum but we will seek ‘permission’ for the other events.

“I was shocked by this response. Why do we need ‘permission’ to use what is ours, what belongs to the people of Kilkenny? We never agreed to simply give them away. We should not be asking for ‘permission’.

“I then proposed that we draft up official protocol to be agreed by the elected members and given to the museum so they are aware that we will be using the sword and mace for particular events and that some occasions such as funerals and Civic Honours will be spontaneous. That proposal was agreed by members.”

Ciaran Conroy, chief executive of Kilkenny Civic Trust which operates the Medieval Mile Museum said it is to the best of its ability providing a lot of old treasures of Kilkenny and putting them on display to the world.

He said: “The sword and mace have been seen more [by the general public] in the last year than they have over the last number of years. We are at the front end, trying to get people in.”

He said they have had no issue with the provision of the mace and sword for events and they have been asked twice already for it – the visit of Prince Charles and the Mayor’s inauguration – and there the historic items were given willingly.

Mr Conroy told the Kilkenny People that the local authority “does not need permission” to get the sword and mace but just needs to make arrangements.

He added: “Planning ahead would help us. A little bit of dialogue then around when it is needed, who’s looking after it and how long will the local authority have it for, to make sure something as precious as the mace and sword is looked after. It’s not even that the Council can get it in the future, we’ve actually done it already.

“There’s no such thing as needing permission, it’s their property. As long as it’s not lastminute.com.

“We were surprised by this thing about permission. It didn’t represent the spirit and the purpose of what we’ve done to date.”