Lily Keogh’s ‘many years’ of public service in Kilkenny celebrated 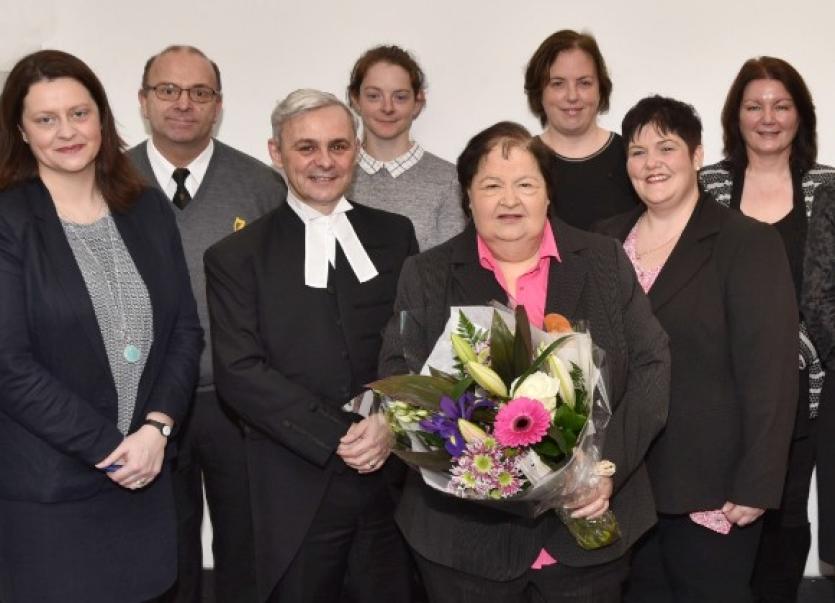 Elizabeth ‘Lily’ Keogh is retiring from the civil service after over 40 years of dedicated hard work - many of which she spent as a court clerk in Kilkenny.

Judge Colin Daly began the sitting of Kilkenny District Court last Monday and the first item of business saw him setting aside a moment to pay tribute to Lily’s “many years” of service.

He joked that he would not mention the number of years she had spent working in the civil service as he did not think it would be fair.

Judge Daly paid tribute to Lily’s “hard work, dedication, attention to detail and respect for the public, colleagues and all service users”. He said she carried out her work year after year and always with a “dash of humour”.

Over her long career Lily worked in the Probation Services in Dublin, she worked in Carlow Courthouse and the Courts Service Head Office in Dublin.

In 2004 she came to Kilkenny to work in the criminal section of the court office and more recently worked in the civil and juvenile sections.

Judge Daly added: “Lily was always and will be held in the highest esteem by all members of the judiciary. I greatly appreciated Lily’s help and I’ll miss our chats in the chamber whether it’s preparing for a list or orders perfected after a list.

She helped me settle into my role here in Kilkenny.

“It is with a heavy heart that we say farewell to a valued colleague and friend. We wish her well in this exciting new chapter in her life.”

The District Court Clerk, Mairead O’Dwyer, said Lily had a “kind, caring and compassionate manner” in the court, on the phone or at the public counter. Sgt Alma Molloy also thanked Lily for her service and on behalf of An Garda Síochana she wished her a “long and happy retirement”. Solicitors also acknowledged Lily’s work and said she “never gave out or complained”.

They added that Lily was “a pleasure to deal with over the last 15 years” that she has been a court clerk in Kilkenny.

The Probation Services then paid tribute to Lily’s hard work and assistance over the years. After all of the plaudits, Lily said: “I appreciate the kind words.”

To laughs from Judge Daly and those gathered in the court room, she addressed her longevity in the civil service and added: “I’ve enjoyed my time over the past 40 years.” Lily now faces into a “major change” which she says she is sure she’ll get used to.

She thanked her great friends for their help and co-operation. She said: “My colleagues are special friends, both the old and the new. Some have soldiered on with me. To each and every one of you, thank you.”

Judge Daly then presented Lily with a bouquet of flowers.