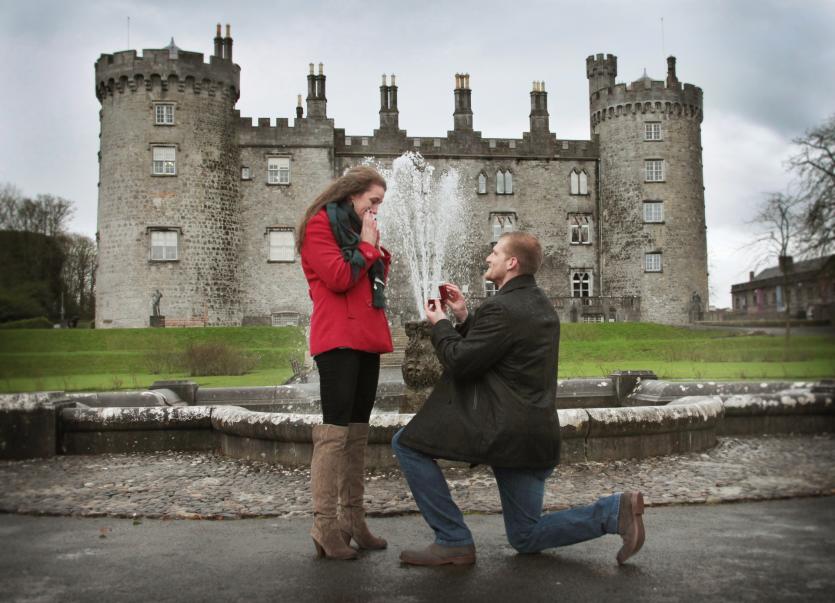 Texans Jordan and Taylor met two and half years ago through a mutual friend and at the end of last year the pair decided to take a trip to Ireland.

Little did Jordan know, Taylor had planned to propose at Kilkenny Castle on New Year’s Eve and he tasked local photographer, Claire Dunne, with capturing the magical moment.

Speaking to the Kilkenny People, Claire said: “Taylor booked me at the start of December and we kept in contact all the way trough, making a plan as how to know each other and what way to take his proposal without spoiling the moment on Jordan.

“We arranged to meet near the fountain on New Year’s Eve at 2pm. They would have drinking water bottles, it was cold and overcast. Rain showers due in the afternoon.” But the plans were in motion.

Taylor and Jordan’s story is one worthy of a motion picture. After they started going out and getting to know each other, they discovered they grew up in the same town of Arlington, Texas, a town with a population of 900,000 people and they lived less than 800 metres from each other.

Taylor worked with Jordan’s best friend in secondary school, they played the same sports, were at the same soccer matches, and even had the same childhood doctor.

They also went to the same university and lived in dorms that were right next to each other. They had been side by side their entire lives and never met.

Finally, at the age of 24, it was time for them to meet, fall madly in love, and begin their love story.

They love travelling and adventuring, and in their adventures, they ended up in Ireland to ring in the 2018 New Year.

Starting their trip in Dingle, they made their way to Kilkenny to explore the traditional pubs, breath-taking cathedrals, and the beautifully restored castle.

Taylor had known for some time that the castle at Kilkenny was the place to ask Jordan to be his wife. He planned the entire day so as to keep the proposal a complete surprise.

Taylor knew that both he and Jordan wanted to be able to “keep and cherish the moment forever”, so he searched for professional photographers in the area and found Claire Dunne Photography to capture every minute.

He chose Claire because he was “very impressed with the way she was able to capture all the emotion in a couple’s special moment”.

Recalling the moment Taylor proposed, Claire said: “So as I was the only other person in the Castle Park Gardens and with my big camera, it was obvious for Taylor to tell who I was.

“He approached me a few minutes after arriving and very nervously handed me his mobile phone while asking me to take a photo of them at the fountain. I acted along with the plan and replied: ‘Sure’.

“His hand was shaking while passing the phone to me.So as I took a few shots, I pretended to ask the couple a few typical tourist questions like: ‘Are you visiting Kilkenny and is it your first time, where are you from?’

“This gave me the chance to say, ‘Oh fantastic, would you mind if I took a shot or two with my own camera as I’m a local photographer for a local paper’. Just then, a huge rain shower came and completely soaked all of us.

“It only lasted a couple of minutes, this wasn’t going to spoil Taylor from proposing, almost as soon as it stopped, we went back to the plan. So as I focused on the couple, Taylor took out his ring and proposed.

“It was a crazy but beautiful moment, soaked to the skin and cold, nothing could hide this couple’s excitement and love, the photographs show how this moment will be one to treasure.

“What a lovely couple and experience to have been asked to capture.” Jordan and Taylor said they were soaked through all their clothes, but they wouldn’t change a single thing.

Jordan wouldn’t have wanted to say “Yes!” in any other way and they couldn’t be happier.

The proposal was perfect the couple said and it now gives them “a perfect reason to always return to Kilkenny and visit the very spot they agreed to spend the rest of their lives together”.

Kilkenny Castle might be a hidden gem for engagements.

There was another couple recently involving a man from Ruislip in the UK, going out with a girl from Carlow, both of whom are living in Melbourne, Australia.

This man also decided to propose to his girlfriend at none other than, Kilkenny Castle. It’s the perfect backdrop.