"We will never reopen the boarded up shopfronts...if we do not have the equal platform of broadband services," says Kilkenny TD 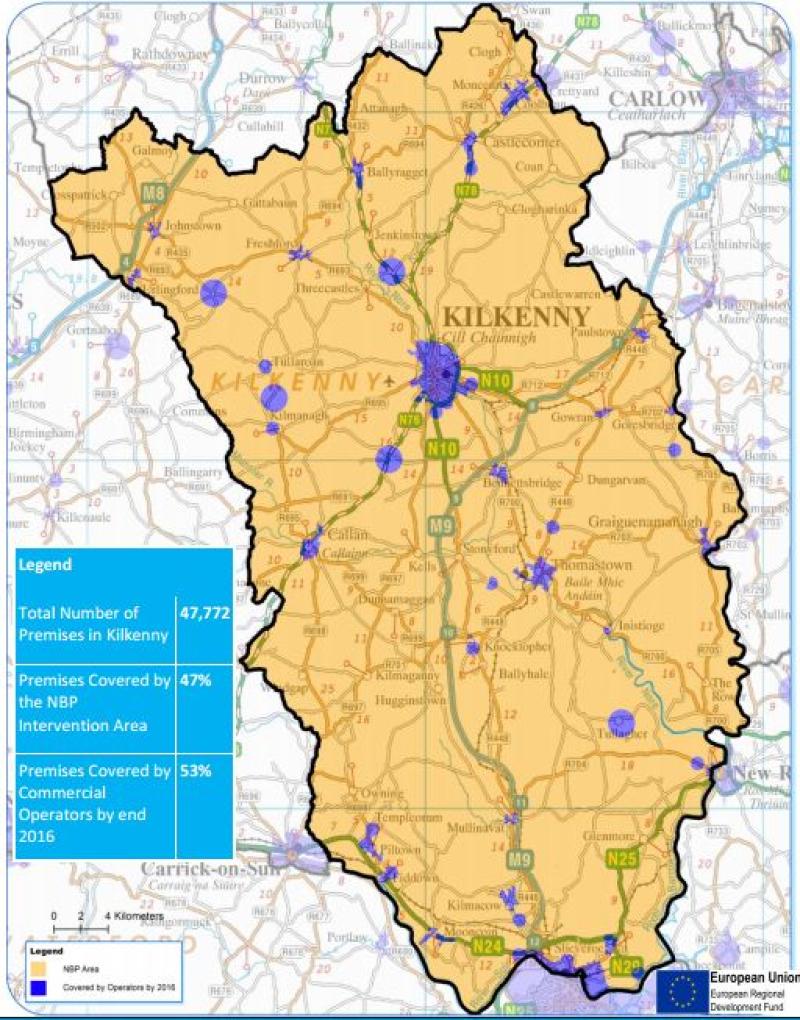 Carlow-Kilkenny Fianna Fáil Deputy Bobby Aylward told the Dáil he had representations that have been sitting in his office since his by-election victory in May 2015 from people living in rural communities and the outskirts of regional towns who cannot understand why he cannot give them updates on the progress of broadband services in their localities.

Speaking during a debate on a Fianna Fáil motion on broadband he said the frustration on the ground is reaching boiling point.

“There is frustration for us as public representatives as well as we have no information with which to go back to our constituents,” he said.

“When people contact me with their Eircode postcodes and I check the national broadband plan map and their houses are classified as being in the amber area for State subvention, I cannot offer any solution whatsoever.

"Rural communities throughout the country have been kept waiting seven years for the roll-out of high-speed broadband by this Government.

"I get the sense that the Government is not really serious about rural Ireland and rural communities such as those in Carlow and Kilkenny.”

Broadband is not a luxury for schools, families, businesses and farmers; it is an absolute necessity, said Deputy Aylward. “If it is not delivered soon, the benefits may be lost forever as investment will not flow to rural and regional Ireland.

"Successive Ministers have failed miserably to bring this crucial national project to completion. I am sad to say I have serious doubts as to when, if ever, it will be delivered.

"It represents one of the greatest Government failures in living memory and demonstrates that when it comes to thinking big and delivering for rural Ireland, this Government always falls short.”

“We will never reopen the boarded up shopfronts, create jobs and sustain enterprise in our regional towns and villages if we do not have the equal platform of broadband services to compete with the larger cities,” he continued.

“The current digital divide is completely undermining the economic viability of rural Ireland. SMEs are walking out of rural Ireland because they cannot rely on reliable broadband services.

"They are not expanding and growing their businesses or creating jobs in their localities because the services and infrastructure are simply not on a par with the larger population centres and cities.”

Tributes to former Ceann Comhairle Seamus Pattison in the Dáil were led by the leader of the Labour Party, Brendan Howlin who described him as a champion of working people and an outstanding parliamentarian.

“Following in the footsteps of his distinguished father James, or Jimmy, Pattison, he distinguished himself as a trade unionist, local representative and on the national and international stage,” he said.

The Taoiseach Leo Varadkar said Séamus Pattison epitomised the spirit of public service that has been the hallmark of our democracy since Independence.

“He served for an extraordinary 46 years in this House, winning 12 elections in a row.”

Fianna Fáil leader Micheál Martin said Séamus Pattison was, without question, an exceptional politician with an extensive career in local government and national and European politics.

“In many respects, he was regarded as a father of the Dáil for many years, mentoring many younger Deputies who were on the way up,” he said.

Fine Gael Deputy Pat Deering said coming from the constituency of Carlow-Kilkenny, he was a man who treated everybody the very same.

“No matter what party one was from, it made no difference to Séamus Pattison,” he said. “Whether he was an MEP or a Minister of State, he always looked forward to coming home to look after his constituents.”

The regulation of sulky racing was called for n the Upper House by Senator Jennifer Murnane O’Connor.

Unregulated sulky racing is dangerous and has already led to loss of life, she said. “It is a traditional sport which should have a traditional home and be banned from our highways and byways. There is no appetite for sulky racing on public roads.

Accordingly, it needs to be regulated. I received hundreds of calls over the past several weeks on this issue. When I rang the local authority and the Garda, I was informed it is not regulated.

"The Minister needs to introduce regulations. We cannot afford to lose another life on the roads because of sulky car racing.”

Recently, she said there was an inquest into the death of a young boy. The jury had recommended the introduction of regulation and safety considerations for the use of sulky cars on public roads.

“I also read of an incident where a pregnant woman was run off a road by five cars protecting a sulky race,” she said.

“If I decided to block off a public road with some of my friends to set up a snooker table to play a few shots, we would find ourselves in a Garda station.”