Dynamic Kilkenny duo get ready for a marathon adventure! 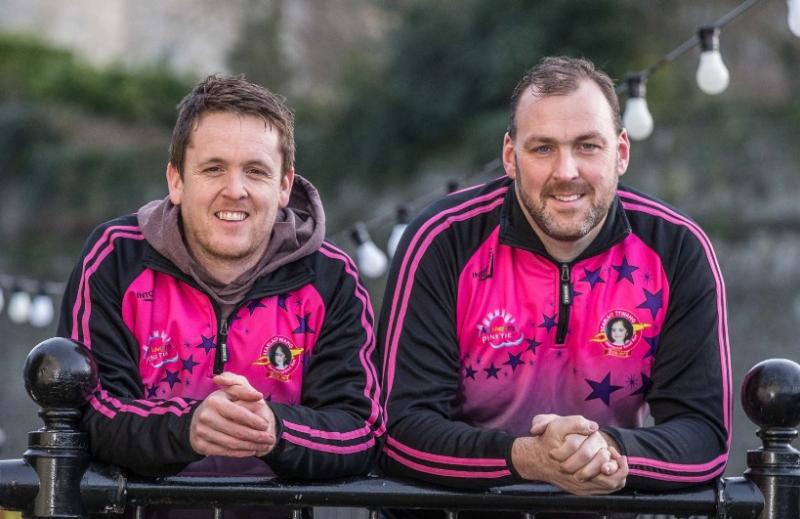 This May, two Kilkenny friends will tackle a 314.4 mile endurance challenge as they run 12 marathons throughout the 12 counties of Leinster over a consecutive 12 day period.

Titled the 12 County Leinster Marathon Challenge, the event is the brainchild of local men, Mark Duffy, 38, and James Wise, 43, who will run one full 26.2 mile marathon in each Leinster county and it’s all taking place to raise vital funds and awareness for the children’s cancer charity Aoibheann’s Pink Tie.

The challenge kicks off on Wednesday, May 23 in Dundalk and finishes a little under two weeks later on Sunday of the June Bank Holiday weekend as the two men run from Castlecomer to Kilkenny.

Speaking to the Kilkenny People, James explained the reasons why he and Mark, who have a combined 22 marathons completed between them, decided on taking on this huge physical effort for Aoibheann’s Pink Tie.

“A little over two years ago, young Searlait Tywang from Castlecomer passed away from childhood cancer after a hugely courageous battle,” he said. “We were aware of Searlait’s story through my wife Michele, who works with Searlait’s cousin.

“Unfortunately after 18 months of fighting the illness, she passed away in January of 2016. Searlait’s mam, Mairead, has been very vocal on the huge support Aoibheann’s Pink Tie gave to Searlait and their family throughout her time in St John’s Ward in Crumlin Hospital.

"As well as making dreams come through, the charity also provides practical, emotional and if required, financial support to families.”

The charity, which was set up in 2008 by Jimmy Norman and Mick Rochford, when Jimmy lost his 8-year-old daughter, Aoibheann, to childhood cancer is completely self-funded and receives no government assistance and so James and Mark are absolutely delighted and honoured to be in a position to raise much needed and vital funds for them.

So, how does one train to run one marathon per day in each county of Leinster?

“We’ve been lucky already with the support we’ve had from people like Louise Quirke in Kilkenny Sports Therapy and Jackie Varley from Optimal Health Kilkenny, who have donated their services free of charge and this has been an unbelievable support to us both,” said Mark.

“We also have two fantastic wives Sarah and Michele and seven children between us who, already in our three months of training up to now, have sacrificed an awful amount.

“The biggest challenge is putting the logistics of the whole event together as everything is multiplied by 12,” he said.

“I work full nights as an Intellectual Disabilities Nurse Manager and James is on the road five days per week in his role as a Sea Fisheries Protection Officer.

"As a result, we may have to train at 6am some mornings and 9pm the next day - with the recent frosty Winter it was tough at times.

“We’re training six days per week at the moment, broken into four days on the road and two days building strength in the gym,” he continued.

“Saturday is usually the ‘rest day’ but with children, this is normally the busiest day of the week for us both.”

As well as training and working out the logistics of the challenge the duo are appealing to the people of Kilkenny for help.

“We’d love for as many people to join us to run any distance on any day that suits them,” encouraged James. “We have over 50 signed up already with many joining us on the final Castlecomer to Kilkenny leg.

“Whether you want to join us for a full marathon or 1km, we’d be absolutely delighted to have you join us. All you need to do is register on our Facebook page (12 County Leinster Marathon Challenge) and of course, it’s completely free of charge.

“We also need support with fundraising so if anybody wishes to hold a fundraising event or donate to our Everyday Hero donation page, please get in touch,” he added.

“We’ve recently contacted over 80 schools in Kilkenny asking if they’d be interested in hosting either a ‘Superhero Costume Day’ or a ‘No Uniform Day’.

“There are huge costs involved in accommodation and diesel costs as we will have a support van with us for the duration of the event so if any local company is in a position to help out in this area it would keep our expenses to a minimum.

“Companies such as Waterford Greenway Cycle Tours and Bike Hire owned by Kilkenny’s John Purcell and Jason Morrissey have already come on board,” he finished.

“It would be fantastic to have as much local people row in alongside us to help raise as much funds and awareness for Aoibheann’s Pink Tie.”