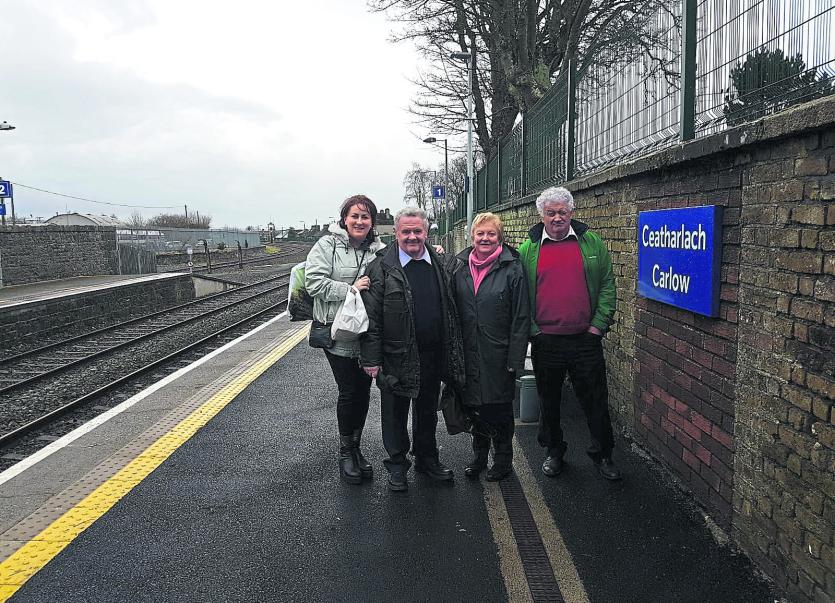 Kilkenny landowners, Julie Murphy, Noel Copley, Breda and Pat Dalton on their way to a meeting with Coillte in Killaloe, Co Clare

A number of Kilkenny farmers, many of them old and in poor health, are counting the cost of their involvement with State forestry body, Coillte.
Contracts they signed 20 years ago with the forestry company are causing them concern.
One woman, Julie Murphy, from Kilmanagh is finding it extremely difficult.
She signed a contract with Coillte in 1997 just after husband passed away.
She received an upfront payment at the time after agreeing to plant 90 acres.
Now, over 20 years later, she has learned that she has to pay that money back when the crop is harvested.
“No one told me that and I certainly wouldn't have agreed to it at the time,” she claimed. (This is contested by Coillte.)
With three teenage sons to look after on her own, she feels there has been a lack of trust with Coillte, dating back to the time of the signing of the contract.
She suffers from fibro myalgia and finds it hard to get out of bed, the only thing keeping her going, is caring for there three boys, who mean everything to her.
Symptoms include chronic muscle pain, fatigue, sleep problems, and painful tender points.
The stress of dealing with the Coillte contract has made things worse, she feels.
The Irish Farmers' Association (IFA) lent its support late last year and she no longer felt isolated.
A meeting was held last week with farmers, the IFA and Coillte, where Coillte executives were left in no doubt about how contract holders felt about how they had been treated.
The problem for Julie and others is that no one knows the details of the other 630 contracts.
Her contract is a 55% to 45% split in her favour .
However, before she gets a cent, Coillte will take out the costs of harvesting, marketing, inventory costs and other expenditure.
Coillte statement
In a statement Coillte said the vast majority of the 630 farm partnerships it entered with farmers between 1993 and 2012 were working well and as intended.
“This continues to be the case. Coillte can also confirm that it is satisfied, after reviewing contracts with farm partners, that there are no cases where farmers have not been paid what they are due, and it is fulfilling all its contractual obligations.
“Coillte strongly disagrees with many of the assertions made around the fairness of farm partnerships.
“While there are a number of differing contracts in place, each offers benefits to both the farm partners and Coillte. In all cases Coillte is responsible for optimising the value of each partnership for the benefit of both partners. Coillte is committed to living up to this responsibility.
“Coillte is confident that all partners received independent legal advice, and our records clearly show that detailed engagement took place between Coillte and Julie Murphy’s solicitor before the contract was signed.
“In a small number of cases, an issue has arisen around the timing of the commencement of annuity payments from Coillte.
“This was due to a change in the timing of the premium payments from the Forest Service. Coillte has made it clear that it will honour the spirit of the agreement with its farm partners and will commence annuity payments earlier than specified in the contract to ensure continuity of income for its partners. A payment has been made in 2018 to Julie Murphy in accordance with this commitment.
“Julie Murphy’s farm partnership has been very well managed and this is evidenced by the fact that it is the recipient of an RDS Gold Forestry Award.
“Coillte is aware that in certain cases where there are particularly high performing crops, some partners have looked to exit the partnership agreements.
“Coillte’s position is that where genuine reasons exist, they will explore options with farm partners on a case by case basis, subject to commercial terms.
“Coillte acknowledges it could improve its communications concerning commercial transparency and it has committed to issuing all partners with clear commercial statements. Coillte has engaged KPMG to assist in this process and to provide an independent review of this process going forward.
Background
Coillte began their Farm Partnership Scheme in 1992.
It was designed so that farmers could have an annual income from their woodlands over a 40 year period.
Even though there are 690 partnerships there’s 35 different types of contracts.
The land owner would continue to retain ownership of the land. Coillte paid an advance payment at the start of the scheme.
Now farmers are looking into contracts and see what exactly they have signed up to.
The Forest Service Premium is over and in many cases the devil is in the detail. The timber industry has moved on and improvements in land type and breeding mean trees are growing quicker and better. Rotation lengths are not as long as before. Crops are approaching clear fell from year 28.