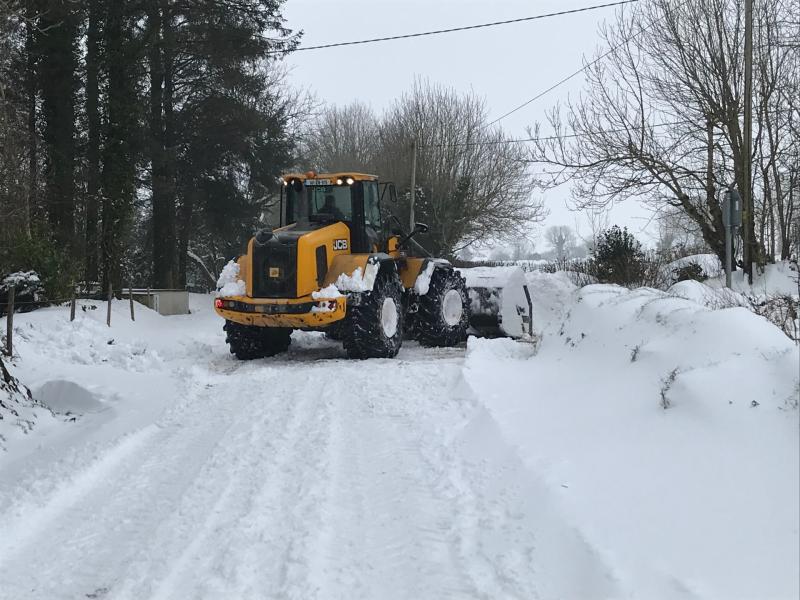 Farmers dig out the locals in Glenmore as they remove snowdrifts

The forecaster added: "Widespread lying snow and ice will continue to lead to hazardous conditions.

"There will be a risk of localised flooding due to rising river levels and there will be areas of surface water pooling. Mountainous catchments and urban areas most affected."

The alert is valid until noon on Monday.

Schools and colleges are expected to reopen tomorrow after they were closed during Storm Emma.

However, it is being left to individual institutions to decide, depending on the circumstances and conditions in their area, according to the Department of Education.

Meanwhile clean-up operations are continuing today across the county.

The public are advised to refer to Kilkenny County Council's website: http://www.kilkennycoco.ie for a list of the roads that are now passable with care throughout the county.

Update-10am Sun 4th March
Roads crews working in areas in North & South of the County where serious accumulations have occurred. Three heavy machines have been deployed to the Castlewarren / Brown Mountain area which is impassable, in an effort to clear drifts. @merrionstreet

Those who are cut off by the very large drifts keep in touch by phone with friends & family
We would ask water customers to conserve the supply as breaks may occur in the coming days
Regular updates will be provided on all normal news channels, social media, & the coco website

Still plenty of snow to clear in some areas this morning. Some snaps from windgap Kilkenny, Rathcoffey Kildare and Tinahely Wicklow. #GlanbiaIreland #StoremEmma #FarmSafely pic.twitter.com/fQN6BMyEZt