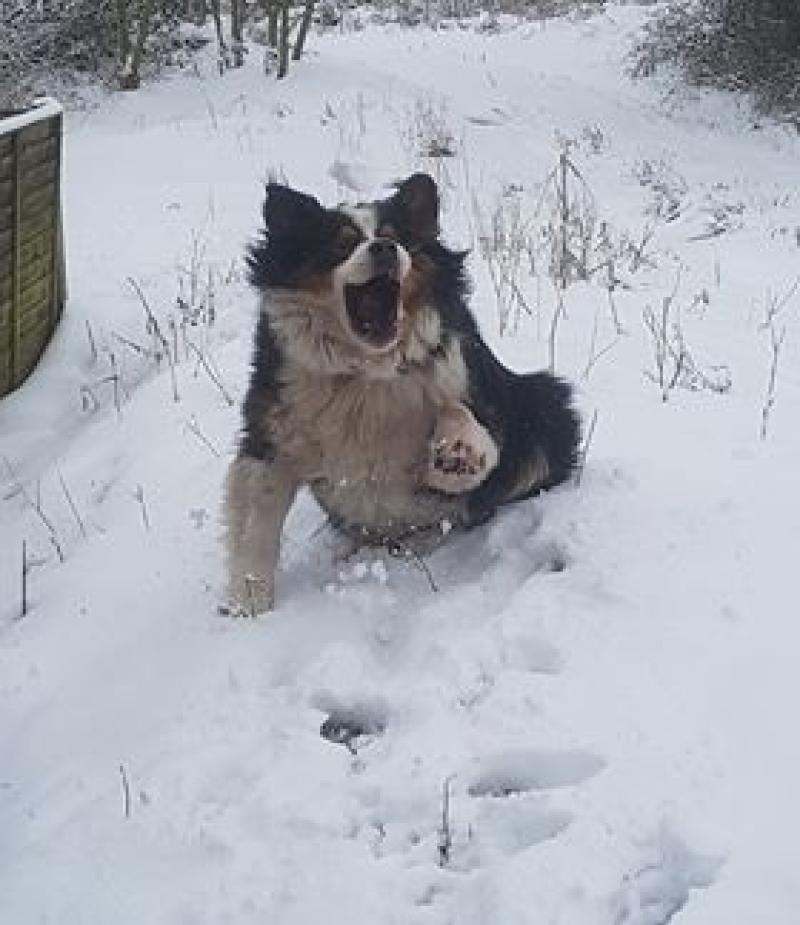 A dog enjoying the snowfall

The collision of Storm Emma and the Siberian Beast resulted in 178 calls to Kilkenny County Council’s call centre and to the out-of-hours emergency number.

The Winter storm is expected to cost more than Hurricane Ophelia last October - which had a bill of €320,000.

Kilkenny experienced some of the worst snowfall in almost 40 years as Storm Emma covered the county in up to 30cm of snow in some parts along with deep snowdrifts.

The worst affected areas in the north were Castlewarren (pictured), Coon, Moneenroe , Johnswell and Muckalee.

The whole county was covered in snowfall but it was particularly bad in the south in places like Slieverue, Mooncoin, Mullinavat and Glenmore.

Director of Services at Kilkenny County Council, Tim Butler, paid tribute to the efforts of local authority staff and volunteers across the county.

On the cost of Storm Emma, he said: “At this stage we do not have any idea of cost but would be of the opinion it will be higher than Storm Ophelia last October which cost €320k, we should know next week.

"Most roads on low ground are now clear of snow and although all roads are accessible; those on higher ground many of these only have single lanes with walls of snow either side.

"Care is advised on all roads. We would ask communities to check in with vulnerable neighbours to ensure they are ok and conserve water.”

There were 178 calls received to March 4 in call centre and to out of hours emergency number.

He added: “KCC would like to thank all Council staff, Defence Forces, Civil Defence, Fire Service, Gardaí, HSE, voluntary sector IFA and all other members of the community who help out during this time.”

A Status Yellow snow and ice warning for Leinster was scheduled to be in effect until Wednesday morning - one week after the initial snowfall landed.

Niall Dollard of www.kilkennyweather.com said the snow that hit the county between February 27 to March 3 was the deepest the county has seen in 36 years and in parts of the south of the county, the deepest since 1947.

“The first snow showers arrived in from the Irish Sea on Tuesday afternoon. By 9am Wednesday there was 7cm lying snow in the City.

“More snow showers piled in from the Irish Sea on Wednesday with the east of the county badly affected. By Thursday the wind picked up and the first reports of drifting snow blocking the roads, were coming in from the communities living on the Comer Plateau,” he said.

On Thursday night Storm Emma was moving up towards the southwest of England and then anchored off the south coast of Ireland.

He added: “The maximum level of snow recorded in Kilkenny Friday afternoon was 15cm, just short of the 16cm maximum recorded in 1982. Drifting was commonplace.

“You only had to move a short distance out of the City to the more exposed Waterford Road to see big drifts over 1.5 metres stretching across the road.

"By this stage many parts of the south and east of the county had over 30cm level snow and drifts as high as 2 metres deep.

“The fact that Kilkenny only had 66% the normal rainfall in February and the slow thaw, has helped ensure that there would be no repeat of a flooding incident like 1947.”

Storm Emma also brought with it the coldest temperature of the year last Thursday when the mercury plummeted to a chilly -5.4 Degrees Celsius.