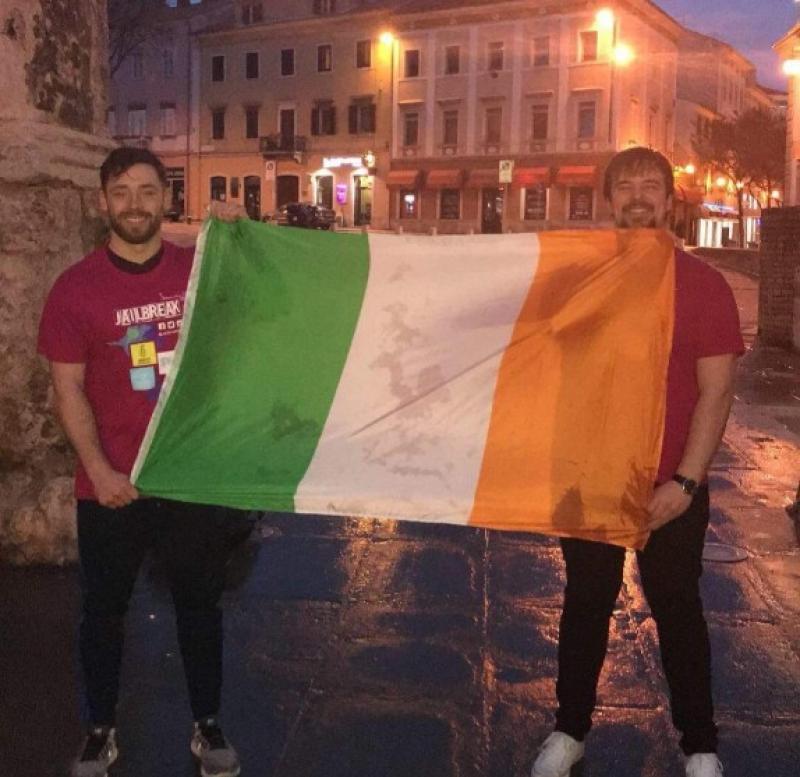 It is fundamentally a race across Europe to “Destination X” with contestants trying to find their way using only money from sponsors, whilst raising as much money as possible for chosen charities.

They narrowly missed out on first place by only “a minute and a half”. The finish line turned out to be the arch of Sergii in Pula on the Istrian peninsula in Croatia.

“Our route took us from the starting point at Dublin Castle to Berlin, Dresden, Prague, Vienna, Llubljana, Zagreb and then down to Pula,” said Sean.

The teams of two have 36 hours to escape from the starting point in Dublin and make their way to “Destination X” with Jailbreak HQ releasing clues as to where the destination is throughout the 36 hours of the race.

“Our travel for the race was sponsored by Castle Orthodontics on the Parade. Both myself and Sam are from Kilkenny. I’m from Jeanville just outside Goresbridge and Sam is from Tullaroan. We’re both UCC students, I’m studying law and Sam is studying PE and English and he’s the captain of the UCC hockey team.

"We both went to school in Kilkenny College.

“In order to take part there was a minimum of €400 that had to be raised per team, 200 teams signed up to take part hence we were named Team 130 - ‘The Bearded Bandits’.

“We set off from Dublin Castle with all the other teams at 9am on Saturday. We flew from Dublin to Berlin, then got a bus from Berlin to Dresden then to Prague then to Vienna, flew from Vienna to llubljana in Slovenia," he said.

The pair had to decipher clues along the way. In an added twist, the rules of Jailbreak are that you can’t fly out of a country you flew in to.

“From Slovenia we got a bus to Zagreb in Croatia," Sean continued. “We then rented a car after Jailbreak HQ released the last clue that Destination X was on the Istrian Peninsula.

“On arrival in Pula it was released that the finish line was the Arch of Sergii in Pula,” he said. “We arrived a minute and a half after 6 on Saturday, taking third place.

“Only 90 of the teams made it out of Ireland and only 16 teams actually made it to Destination X. The rules dictate that you can’t spend any of your own money on travel and that you have to get a sponsor.

"We also raised €597 for charity through hosting a quiz in UCC and collecting on campus along with donations from friends and family," he said.

When asked about the experience, Sean added: “It was an amazing experience, in the build up to it we learnt so much about both the charities and the work they do and just how hard it is for these charities to do work without events like these to raise awareness for their causes.

“The race itself was really testing, trying to get across Europe, to an unknown destination, under pressure with no sleep.

“As a team we worked really well together and were delighted we even made it to ‘Destination X’ considering so many teams didn’t. It was a seriously worthwhile experience and something I’ll never forget.”