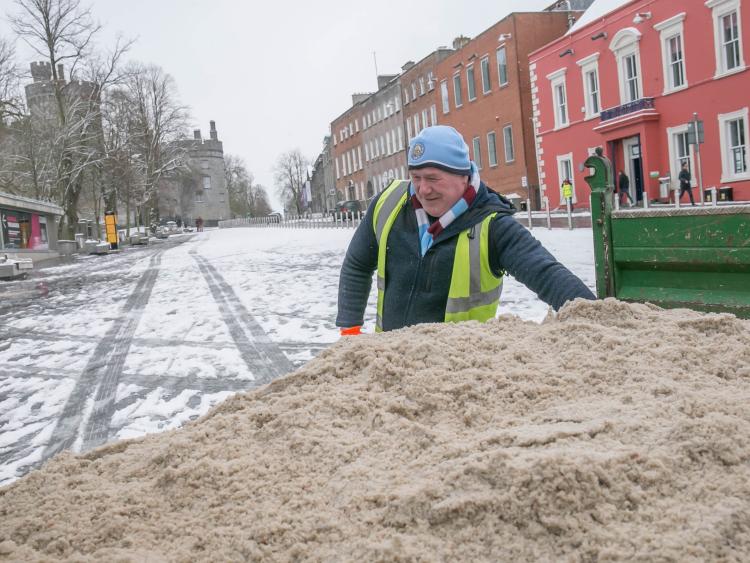 Almost 1,000 tonnes of salt were deployed around the county’s roads during the snow and freezing conditions brought on by Storm Emma and the ‘Beast From the East’.

There were ‘huge snow drifts’ in the north, south and east of the county in particular — up to 2.5m in places. The N24 and N25 routes were significantly affected, while the link roads between Castlecomer and Ballyragget, and between Mullinavat and Listerlin were impassable for lengthy periods.

At the March meeting of Kilkenny County Council, director of services Tim Butler, who headed up the local authority’s response to the extreme weather event, gave members a presentation. He noted it was the second Status Red weather event in the space of five months, and it had involved the use of ‘significant resources’.

“Some houses in some areas were completely cut off,” he said.

He detailed how the response operation had been put in place and warnings issued ahead of the onset of the conditions. Senior engineer Seamus Kavanagh reviewed the salt stocks in the days prior.

As well as the treatment of regional routes, and other Priority 3 routes treated where possible (albeit later in the day), the council was in contact with the IFA with regard to putting grit at strategic locations such as hills, bad bends, and junctions.

In total, 192 calls to the council’s designated call centre, 102 of which were roads related. There were also a number of housing maintenance calls.

Mr Butler also revealed that the Good Shepherd Centre was at capacity , and possibly slightly over capacity. In addition to the council staff working to clear the snow, all fire and rescue staff were on standby. As all crews had to be in the stations overnight and for almost 30 hours in order to be available in the event of emergency. Mr Butler said they had slept in ‘quite confined conditions’.

They dealt with seven callouts, one of which was a house fire, while also providing assistance with clearing footpaths.
“They also made a lot of courtesy calls to people to make sure they were okay,” said Mr Butler.
The Civil Defence also provided assistance, including 29 transports for people who needed to get to certain places in difficult conditions.

Mr Butler said it would be remiss not to acknowledge the huge assistance also provided by farmers and others in the community who had given their time to assist others. He said many people had transported neighbours, brought them shopping, and called into vulnerable people.

“I think it had a significant impact,” he said, adding the next step now was to have an internal review to look at the things the council had got right, and those from which things could be learned.

Councillors paid tribute to Mr Butler, all the staff, and others who assisted during the crisis weather event.