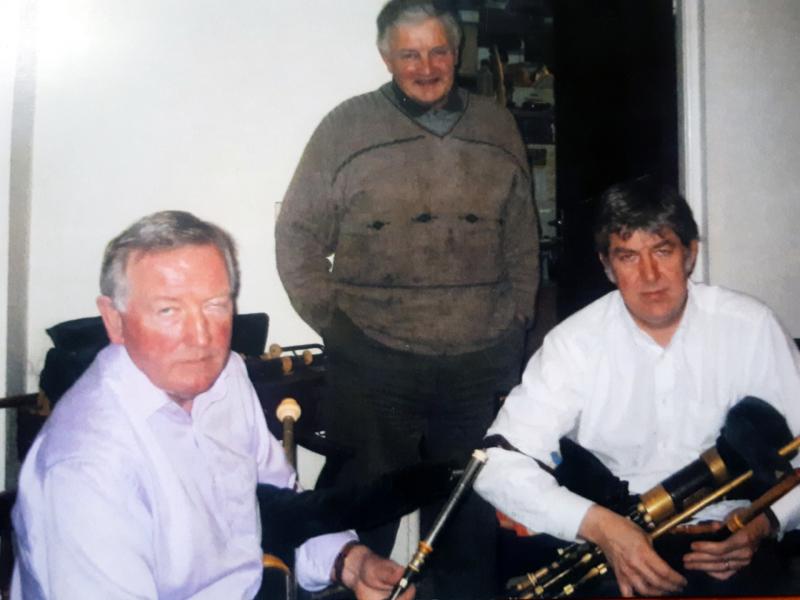 Uilleann piper, pipes and reed maker, Martin Carrigan, has paid tribute to his long-time friend, the late Liam Óg O'Flynn, describing him as “a humble, quiet and unassuming man who lived for music.”

O’Flynn was a regular caller to the Carrigan home and farm in Clara where Martin, now retired from farming, would work late into the night in the workshop in his front room and hand craft and fit reeds for the late musician’s pipes. Reeds are the thin strip of material are fitted into the chanter and vibrate to produce the distinctive uilleann pipe sound.

“In the earlier years, he would often arrive unannounced,” Martin revealed. “Sometimes he would arrive late in the evening, we’d work late into the night, then the music would start and sessions could continue into the next morning.

“He was quiet in crowds but more comfortable among a small group of fellow musicians. I can still picture him playing away with his feet stretched up on the hob to keep them warm. I remember him staying overnight one particular time and helping to bring in the square bales of hay with us before he left the next day. He’d always be whistling or humming – music was his world.”

Martin could spend hours making the reeds for him and for others who might arrive with him, including Paddy Moloney, Prof Padraic MacMathuna and others. His late brother, Fr Tom Carrigan, would get the cane for the reeds from the Sonoma Valley in California. It was perfect and there was nothing like it for making reeds. It was grown in a part of California where they never got frost and it was always harvested just at the right time. Fr Tom would know when to collect the cane and would make the pilgrimage home soon after for a retreat with my supplies.

The cane would arrive in round, cylinder lengths.  Martin would cut it down the middle, sand it by hand, fit it to a copper stem and bind it. Then the real work began – bringing it to a certain pitch. It has to be very clear and carry the sound.

“Liam was never demanding. He knew what he wanted and had great patience. If he gave me a bit of notice, I had a Rowsome chanter similar to his and could test it out before he arrived.”

There are four reeds in a set of pipes and all of them would have to be in tune. “We’d tinker away with them until the sound was just right. He’d know if it was ‘a bit off’ and we’d work until it was absolutely perfect.”

Liam was very dedicated to traditional music and he thought of nothing else. “He’d never leave the pipes down. They were his second family. He was last here about 12 months ago. I spoke to him only a few weeks ago and offered to call up to him in Kill. He said not to, that he would be down soon. That was the last I heard from him til the phone rang and we got the sad news that he had passed away,” Martin added.

Martin Carrigan was Liam’s sole source of reeds and tickets for many of his major concerts would always arrive on their doorstep.  He was delighted when Liam revealed years back that pipes fitted with his reeds featured prominently as they recorded theBrendan Voyage best-selling compilation which was recorded back in 1980.

“Liam was a true gentleman. He was very quiet, very unassuming, particularly in company. For a fella of such natural talent and such great acclaim, he was incredibly humble. He is a massive loss but will forever be remembered.”

Liam was a well-known as a member of the traditional group Planxty which also included Christy Moore, Andy Irvine and Donal Lunny, He had battled with cancer over the past year. O'Flynn also played on a number of best-selling discs, including the Brendan Voyage and Grainne Mhaol.

He was regarded as a master piper and a global ambassador for traditional Irish music. He was born in in Kildare in 1945 to a musical family. He gravitated towards the uilleann pipes and by 11 he was taking classes with the renowned Leo Rowsome. He toured extensively and O'Flynn was able to bring his skill with the uilleann pipes to a worldwide audience.