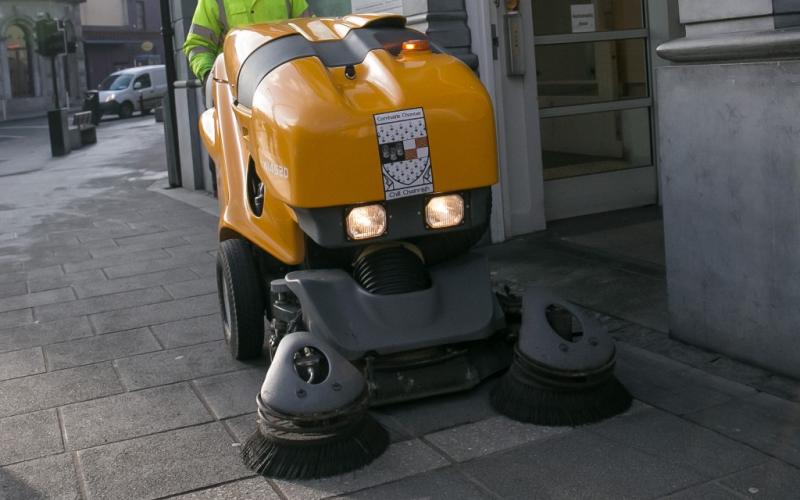 One of two pedestrian sweepers

Kilkenny County Council’s spend on street sweeping and mechanical sweepers has been described as “good value”.

The Kilkenny People previously revealed that the local authority has ten mechanical sweepers operating across Kilkenny City and towns with a countywide expenditure for street cleaning coming to over €1.1 million last year.

Meanwhile the Council also purchased six compact sweepers in 2017 which came to a total of €601,470.

Green Party Cllr Malcolm Noonan said that the spend represented “good value for money in a City and County that was so heavily reliant on tourism for local economies”.

He said: “The urban area in Kilkenny City in particular requires intensive maintenance.

“We have disproportionately higher visitor numbers than comparable regional towns due to our tourism success coupled with so many festivals”.

Cllr Noonan said it is “no accident” that Kilkenny is consistently in the top five in the IBAL Anti Litter League and always hovering around the top award in the Tidy Towns competition.

“It is vital that visitors leave Kilkenny with good memories, but also with an awareness that there is great civic pride here and our urban spaces look well presented and litter free.

“Investment in improving the efficiency of street cleaning is an essential element of our core work in that regard,” added Cllr Noonan.

The figures obtained by the Kilkenny People through a Freedom of Information request revealed details of the mechanical sweeper operations as well as how much it costs to keep the county clean and tidy week in and week out.

Two pedestrian sweepers were also purchased last year for €23,985 each.