Column: Hands and legs still tingly; I sat down to eat lunch - the winner 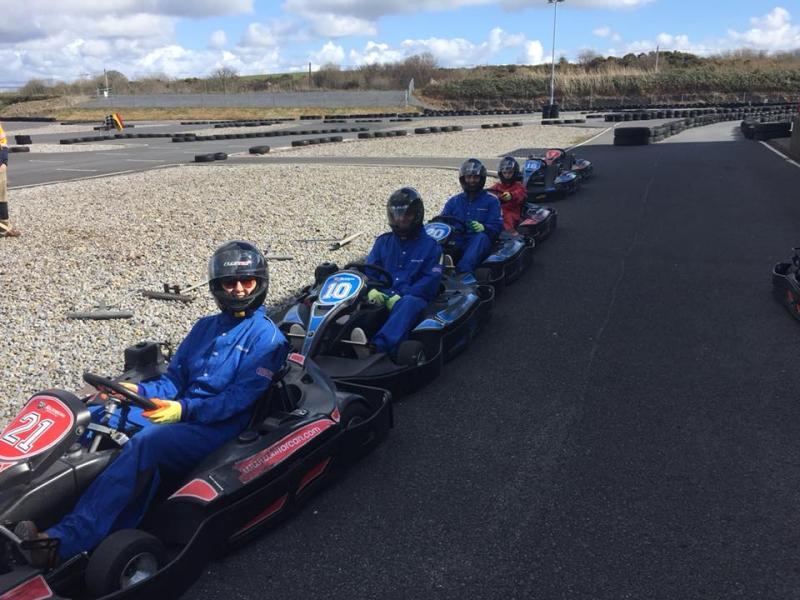 Darren’s partner Audrey took to the track in 1st place, with his brother Jason in 2nd and Jason’s son Finn 4th

I’m the youngest in a family six. I’ve got two older brothers and one older sister. My sister is closest to me in age; but there’s still a gap of eleven years between us.

Anyway, being the youngest, it goes without saying my two older brothers have beaten me in sports all my life.

That seems to be the natural law of things in my family. My sister even on occasion has proven herself fitter or stronger than me.

This story is about one brother in particular. Jason is the second oldest in my family and his youngest son, Finn, was confirmed recently.

My gift to my nephew was a trip to Kiltorcan Raceway near Ballyhale.

A little context too to my antics on the track in south Kilkenny is required.

My brother and I played a few games of pool the night before. I won the first and the second game and I thought for the first time in my life, I was about to beat one of my brothers in a competitive sport.

Two games up in a best out of five and I’m grinning from ear to ear. We racked them up for the third and, in my eyes, final game.

Without getting into too much detail, Jason won the next three games in a row to take the prize of maintaining his unbeaten run.

I’m 28 years of age and still the little brother and beaten by a man well into his 40s.

So, the next day, we arrived into Kiltorcan Raceway for Go-Karting at around noon.

I was told this was a great place to go racing. It lived up to the hype. We were given gear to put on, hair nets, a helmet, gloves and a reassuring safety presentation.

After about ten minutes of readying ourselves, we were mad for tarmac. The sting of the previous night’s pool was still on my mind. I was wounded...again.

We sat into our Sodi GT5 Go-Karts and managed to snap a quick picture with the help of one of the three stewards watching over us on the day.

All lights (or stewards’ hands) went green and it was go, go, go.

The first lap, I was just feeling out the track, with all of us forewarned about some of the corners. I thread carefully the first time, hence it took me 1.03 to get around the place.

After that it was about hunting down my brother so I could do one of two things.

Either send him into the crash barrier, or embarrass him with my deft handling of turns and offensive and defensive overtaking manoeuvres.

It was fruitless. As soon as one driver would overtake, the other would attack and overtake right back.

Great fun all the same. A good battle between two or three people in a Go-Kart is a very enjoyable scrap, especially at Kiltorcan.

There was only one place to beat the brother and that meant I had to drive the fastest lap.

Most of us did 35 laps during the half hour we were on the track. We got out of the Go-Karts, our bodies still vibrating from the engines. We went back into reception and our times were printed out and given to us. Drum roll please...

Jason drove his fastest during his 25th lap when he recorded a time of 45.157.

I destroyed a decades old record, I had beaten one of my older brothers in a ‘sport’. I don’t care how tenuous the victory is, I’m taking it, in true younger brother style.

I recorded the fastest lap.

With my hands and legs still tingly; I sat down to eat lunch at The Longman - the winner.