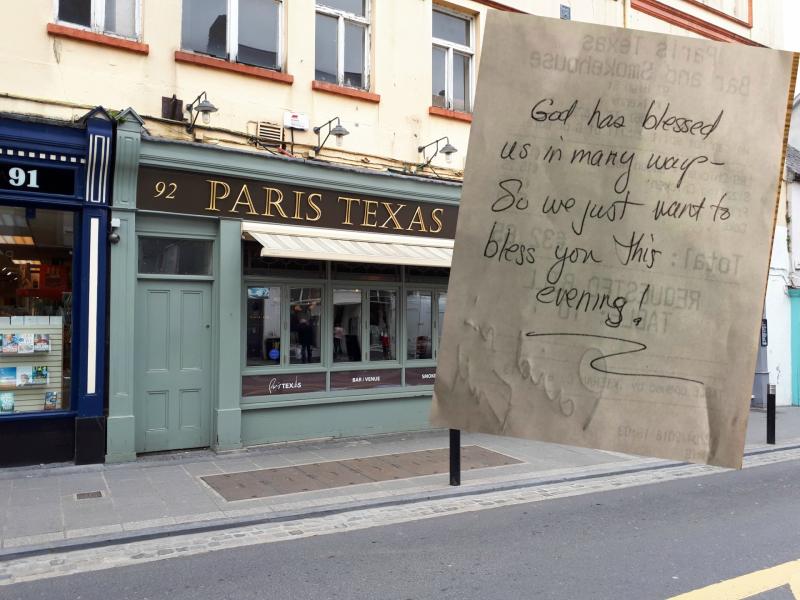 The note left for the family at Paris Texas in Kilkenny, where they went to pay their bill and found it already paid

An anonymous American couple brought a little more kindness into Kilkenny yesterday when they picked up the bill for a local family who were out having lunch.

Tony Coy was out enjoying a meal with his family in local hostelry Paris Texas, when he went to pay the bill. To his surprise, when he got to the cash register, he was informed that his bill had been paid.

A note had been left for him from someone who 'just wanted to pass on the blessings'. Their host revealed it had been a kindly American couple, who wished to remain anonymous.

"Myself and my wife Stephanie Garrehy Coy brought our daughter out for her dinner. When we went to pay a visiting couple from the USA had already paid for our meal as a blessing to us for what god has given them. I am overwhelmed with their kindness and even though we did not see them, don’t know them and probably will never meet them. We wish them all the good things in life and health and happiness always. Thank you so much."

Speaking to the Kilkenny People today, Tony said he would be passing the gesture forward.

"It was unbelievable - I was actually shocked. They were never near us. We didn't see anyone or speak to anyone - didn't notice anything unusual," he said.

"You wouldn't be expecting it. I was embarrassed at first.

"Some people are very thankful for what they have, and pass it on. That's what we'll do. There are people who don't have houses or who don't know where their next meal is coming from; we do. We will pass it on to someone who is more deserving than us."

Tony says Paris Texas seems to be a bit of a hotspot for random acts of kindness. It's the second one he's witnessed there in the last fortnight.

Two weeks ago, at Easter, he got a phone call from owner Pat Crotty who had apparently come into possession of a considerable number of Easter eggs. Tony suggested bringing them out to the 20 or so children in the paediatric ward in St Luke's Hospital. They also brought some out to residents and staff in the St Patrick's Centre.