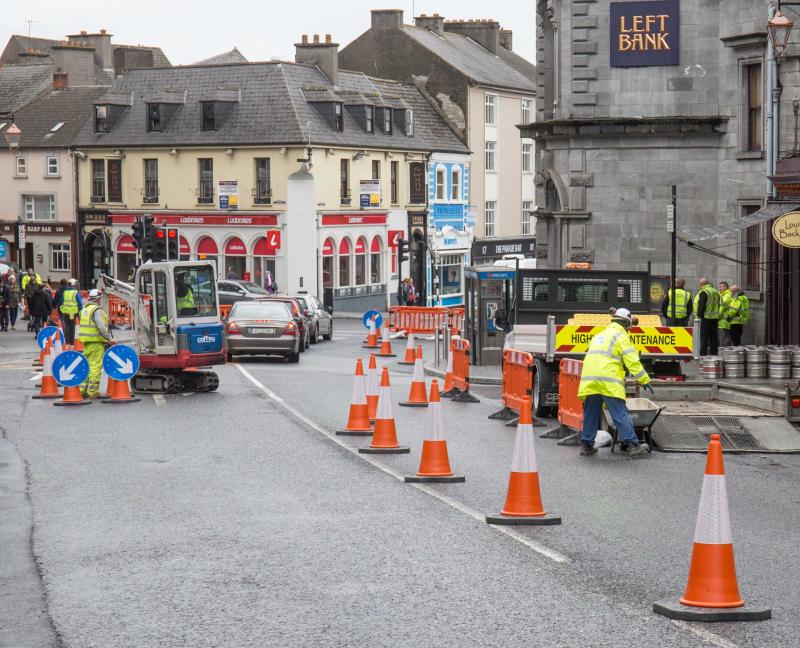 The works on Patrick Street

A local councillor has expressed his frustration over businesses and hotels being given just 14 days’ notice for Irish Water works on Patrick Street in the heart of Kilkenny City centre.

A one-way system will be in operation on the busy street for the next six weeks, as Irish Water carries out works to upgrade the water mains network.

Cllr Pat McKee raised the works at last Friday’s meeting of Kilkenny City Municipal District and described the poor communication around the works to be “completely unacceptable”.

He said: “It is quite extraordinary that we as councillors and business owners get 14 days’ notice of significant infrastructural works in the city.

“It smacks of total disregard and disrespect to the hotels on Patrick Street. They employ hundreds of people and pay significant rates. The blame doesn’t lie here (at local authority level).

“The problem is State bodies doing what they feel is right without considering the impact on the local community.”

Cllr McKee said it “beggars belief” as the works “must have been planned 12 months in advance”.

Sinn Fein Cllr David Kennedy told the meeting that members were “well aware the works were coming up” after they were told about it at last month’s MD meeting and said if all members were present they would have been aware of it.

Cllr McKee hit back and said he was representing the business owners who got two weeks’ notice.
He said: “I’m accountable to my constituents, not Cllr Kennedy.”

Cllr McKee - who told the meeting that he has a full time job on top of his duties as a councillor - added: “You should’ve contacted them.”

Area engineer, Simon Walton, said both members were correct and the works were outlined at a previous meeting but a specific commencement date was not identified to local businesses until “late in the day”.

The Council would have preferred if the works had started earlier this year, the meeting heard, with the works in total expected to take eight weeks and a completion date before the June Bank Holiday weekend anticipated.

He added: “There is never an ideal time to do these works. It is a precursor to the completion of other necessary works.”

This includes the footpath works on the Clubhouse Hotel side.