Inspector Anthony Farrell, Age Friendly Ambassador for the Kilkenny/Carlow Garda Division was involved in the project 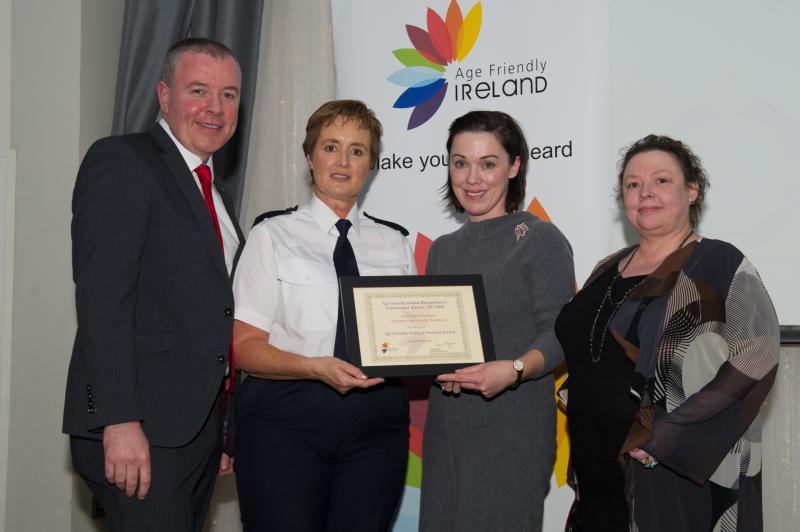 The Kilkenny/Carlow Garda Division was shortlisted for a national award for its Operation Age Friendly Roadshow.

The initiative was shortlisted for an award in the 2018 National Age Friendly Recognition and Achievement Awards.

The application was submitted under the Age Friendly Community Innovation Award.

The Operation Age Friendly Roadshow was the first of a five-phase pilot in Carlow which started in June 2017.

The pilot first focused on Graiguecullen, Carlow and Inspector Farrell wanted to go beyond an open door approach by going through doors and into the community, interfacing and meeting with older persons living in the community.

On specific operational days activities like basic security assessment was performed in each house by a Garda for a house alarm, fire alarm and personal alarm.

In the absence of these products, older persons were advised where and how to source them.

Smaller immediate problems for older persons could be resolved such as passport/driving licence applications.

Visits to Kilkenny Garda Station by older person groups specifically included a visit to the Divisional Communications Room where a suite of town cameras were inspected.

Inspector Farrell said this reinforces with older persons a feeling of safety that someone is watching when they are in town, for example doing their shopping. The initiative is specifically designed to connect with older persons within the community.

At various intervals during the Carlow pilot, a short but intensive policing operation by calling to identified older persons within the community was “extremely positive”. This pilot was deemed a success and will be formalised at future ongoing roll-outs.

Operation Age Friendly Roadshow also compliments other operations such as: text alert mapping where heat maps are being created for Kilkenny and Carlow to ensure maximum operational coverage especially in rural communities.

In this way Gardaí can communicate directly with communities, especially older persons by text message in trying to seek assistance in solving crime and pass on information messages.

As part of a new Operation Cross Over, Inspector Farrell will be deploying units on various days namely Monday, Tuesdays and Wednesdays (12 noon to 5pm) to Operation Roadshow as part of a 10-week cycle in both Kilkenny and Carlow.

The crossover unit will be the primary source of members to support this operation. This deployment will build on the successes of the pilot phase and going forward forge closer community relationships with the community.

The application for the award said An Garda Síochána is “the key stakeholder in providing both safety and feelings of safety and security to our community, especially older persons”.