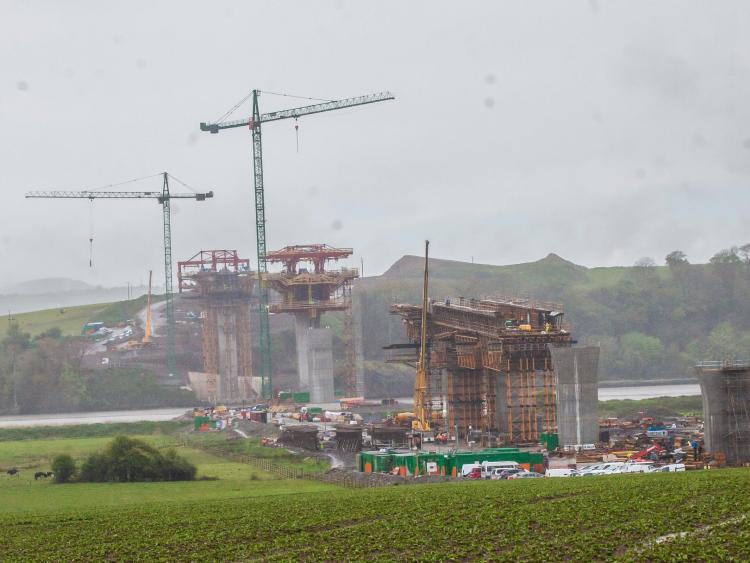 Construction of the Barrow Bridge as part of the scheme

The chief executive of Kilkenny County Council has said completion of the New Ross bypass scheme will gave the area “breathing space” from a traffic point of view once it is opened.

Colette Byrne, the local authority’s chief executive, made the comments at a site visit in Stokestown last Friday where the Council executive and elected members were given an update on the development.

Speaking after the presentation, she said: “It’s a fair insight into the complexities of it. We can be very critical of what’s happening and what’s not happening in the country but when you see a project of this scale happening and the quality and the standard in which it’s happening, it’s impressive.”

She added: “It’s only when the project is open that people will realise the impact it will have on New Ross.

"Most of us would try avoid New Ross at peak times at the moment to avoid the traffic and I think this certainly will give it a bit of breathing space to perform its functions.”

Fine Gael Cllr Fidelis Doherty said: “With the New Ross bypass in month 27 of 40 and due for its planned opening for full use in June 2019 it was a great pleasure to visit the works and to see at first hand the level of engineering, design and workmanship that forms the entire project.

"This major piece of road infrastructure will greatly enhance the national and regional roads network of both the area and the region and will facilitate much improved connectivity and travel times to Rosslare harbour and to the south and south west of the country.

"This will encourage the economic and tourism aspect while at the same time making safer and improved roads network.”