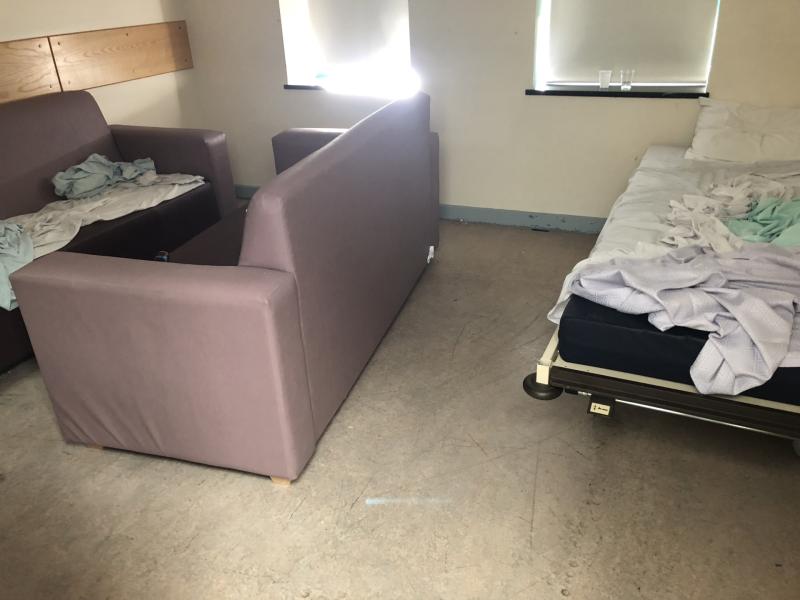 Makeshift beds at the Department of Psychiatry

A local Kilkenny TD has been waiting thirteen weeks for a meeting with management at the Department of Psychiatry in St Luke’s General Hospital, Kilkenny.

Sinn Fein’s Kathleen Funchion has also raised the issue of conditions in the DoP - which serves both Carlow and Kilkenny.

Speaking on May 22 in the Dáil during a debate around mental health services provision, Deputy Funchion said: “It (the DoP) now serves patients from Tipperary since the closure of St Michael’s Unit in Clonmel, yet there has been no expansion in that service even though there has been a big increase in the number of patients with which it deals.”

In January of this year, the Kilkenny People revealed that a number of patients at the DoP were forced to sleep on makeshift beds for over 48 hours and endured “atrocious” conditions, according to a staff member.

Deputy Funchion revealed that “one of the most significant issues is that we have been looking for a meeting between Members of the Oireachtas from Carlow and Kilkenny and the HSE management responsible for the DoP at the hospital since 14 February”.

She said: “I requested a meeting but I imagine all Members of the Oireachtas in the constituency have an interest in it.”

“The head of the hospital group for the South East came back to say that this was not her area.

“There was no further information. It was just a case of her not being accountable for this. We went through the Oireachtas HSE representatives line but heard nothing back.

“We did so again on 15 February and 29 March and on 10 May we finally tracked down somebody who is supposed to be head of the mental health services for the region...but there was still nothing,” Deputy Funchion added. She said she is not “one bit surprised about the HSE because it seems to be accountable to nobody; it does whatever it likes”.

“I would like the Minister of State to convene a meeting of the management there. I have no faith in them given that they do not have the manners to come back to an elected representative in the area to say ‘I’m not the person you should be contacting, but this is the person’ or ‘I’ll get somebody to contact you with the information’,” the Kilkenny TD added.

The 44 bed DoP in Kilkenny is located on the grounds of St Luke’s General Hospital and is serving the Carlow, Kilkenny and South Tipperary catchment area. In a statement, the HSE said they will be meeting with local area representatives.

They said: “The DoP has 45 Whole Time Equivalent (WTE) nursing posts in place, in addition to other excellent medical, specialist and support staff to serve the needs of all those who require treatment and support. The HSE co-operates with all proceedings of the Oireachtas.

“In addition, South East Community Healthcare management discuss mental health services (including those serving the Carlow and Kilkenny areas) at meetings of the HSE’s South Regional Health Forum and its South East committee.”

Responding to Deputy Funchion in the Dáil, Minister of State at the Department of Health, Jim Daly, said: “I will progress the matter if the Deputy sends me the detail of the issue.

“The public representative has a key role to play in the delivery of mental health service.”