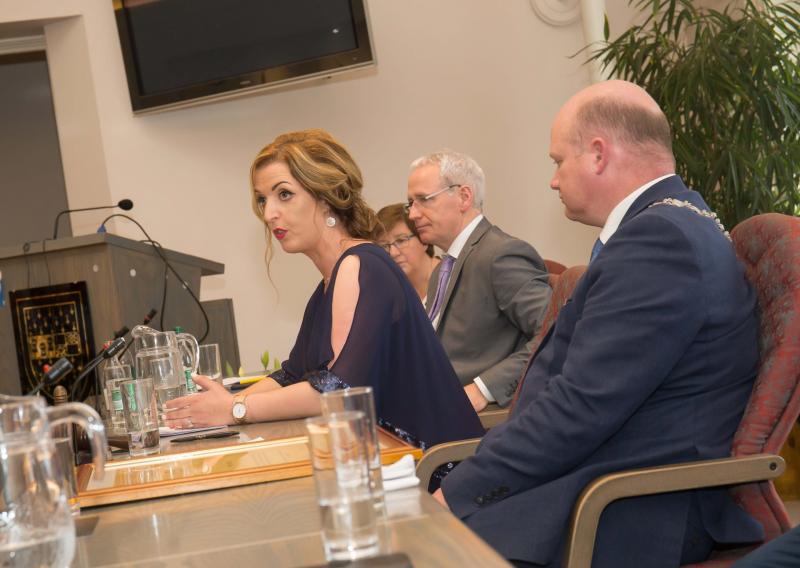 Vicky Phelan speaking at the reception in her honour at County Hall PICTURE: PAT MOORE

The emotion was palpable on the top floor of County Hall in the Council chamber on John Street, as local representatives responded to Vicky Phelan’s profound address.

Many councillors choked back the tears as they spoke directly to one of the most important and courageous women this country has ever seen.

It wasn’t her bravery, her valour that shone through on that clammy Friday evening; we’re all too familiar with those qualities of Vicky.

It was a realisation that makes Vicky all the more endearing. Whether speaking to a room full of dignitaries or speaking one to one, a simple notion came to mind. She was normal.

A working mother-of-two who made a decision because she knew it was the right thing to do, not for herself, but for others.

And in that simple, altruistic act, Vicky could well have changed the future of Irish healthcare.

It was impossible not to well up with tears listening to her speak and the candour with which she spoke.

That’s her, the woman that spoke so beautifully, that’s the heroine, a wonderfully normal woman doing extraordinary things for our daughters and our sons.

Cllr Pat Dunphy, who proposed the special reception for the Mooncoin native, began the councillors’ retorts and did so eloquently.

He said: “I hope and pray things turn out good for you and on behalf of the people of Mooncoin, Kilkenny, Ireland, thanks on all their behalf.

“Thanks for what you’ve done in spite of what you’re going through.”

The tone had been set and Cllr Mary Hilda Cavanagh followed, she said: “As a woman, as a mother and grandmother, and as a public representative, I want to thank you for being here with us. Your immense courage and your deep sense of justice and civic responsibility are your hallmarks - and an inspiration to all.

“You have spoken publicly about your most personal traumas and private pain and your willingness to do this will undoubtedly save lives.”

Cllr Eamon Aylward added: “It isn’t every day we have a hero in this chamber, to me that’s what you are. It’s hard not to be emotional listening to you there.

“Because of your courage, you exposed things that might never have come to light.

“The easiest thing for you would’ve been to sign that confidentiality agreement and you didn’t. Thank you.

“I hope you get the answers you’re seeking.”

Cllr Tomás Breathnach said there is power in words Vicky “did not consent to silence” and when she said no, the power of that reverberated around the HSE, the county and country.

“You shook the system and changed attitudes, particularly to women’s health. You have made a stand and our presence here says we stand with you.”

Cllr Sean Tyrrell said Vicky had shone a spotlight on where women’s health should be while Cllr Malcolm Noonan said the country was “deeply indebted” to her.

Cllr Breda Gardner said Vicky is proof that if you “stand up to injustice, great change can come about”.

Meanwhile, a protest march was held outside City Hall in Kilkenny on May 30 - as part of a series of demonstrations held nationwide - in solidarity with the women affected by the CervicalCheck scandal.