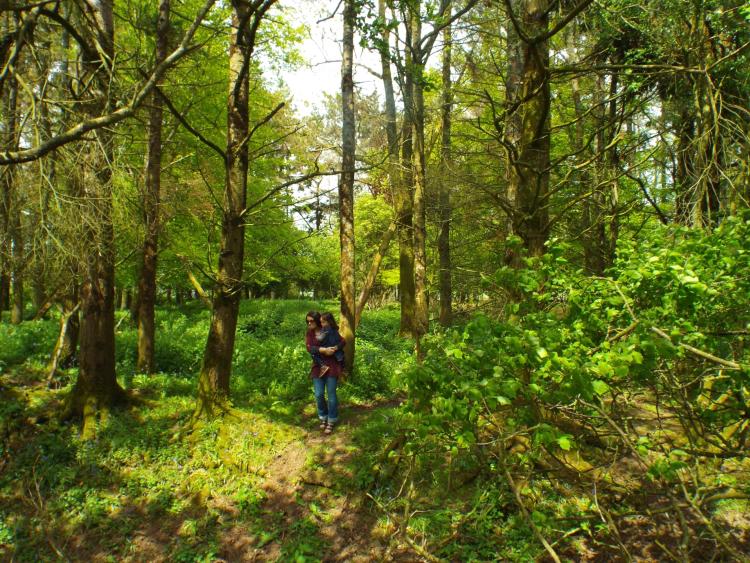 Geni Murphy and her daughter Pia

The importance of hedgegrows as a natural habitat for wildlife was explored during a recent walk organised by An Taisce at Mothel Lane, which leads to Dunmore Caves
In addition to the hedgerows along the lane, adjoining structures including an old graveyard and a Rath provide habitats for wildlife.
The development of the caves as a commercial enterprise by the Office of Public Works in 1973 involved widening the approach road – the lower part of the lane and this impacted severely on the hedges.
This hedge is also under increasing pressures from traffic, house building and agricultural practices. It was probably established 200-300 years ago. Hedges are important heritage features, and if well maintained they can support a great variety of wildlife and provide corridors that permit wildlife to move between habitats.
According to secretary of the Kilkenny branch of An Taisce, Mary Brennan, it is ‘important to be aware of their fragility and to recognize the pressures our activities subject them to’.
The group of walks observed the diversity of the old hedge which provides food and shelter for insects, birds and mammals. Bees were observed on the flowers and solitary bee nests were present in the banks. Much of the hedge is no longer suitable for nesting birds because it is either cut too low or does not provide adequate coverage. The ivy clad trees offer some compensation. The tree/shrub layer included ash, sycamore, wild cherry, oak, hawthorn, blackthorn, ivy, honeysuckle, briars and wild roses. The high banks displayed re wildflowers including cow parsley, herb Robert, cranesbill, vetches, red campion, bluebell, ground-ivy, violets, speedwell, primroses, wild strawberry, lords and ladies, and the vegetative parts of many summer flowering plants such a woundwort, meadow sweet and willow herb. The verges had clover, daisies and trefoils where they were not overmowed.
According to Ms Brennan the hedgerow has changed over recent decades mainly due to being removed for road widening along the lower part of the lane, and due to poor maintenance along the upper part of the lane. The following pressures were evident including the impacts of road widening – hedge removal and replacement by concrete rails. Most of the hedge was not replaced but some natural seeding has occurred with hawthorn, ash and briars. There was one good example of replanting containing a variety of plants of hawthorn, guelder rose, blackthorn, hazel and beech.
The group also explored the Rath of Mothel - an earthen ringfort surrounded by a bank and ditch. Most raths date from the period 500 -900 A.D. This one probably originated as a farm enclosure with buildings made of timber. It is exceptionally large with a diameter of 80 m and has a commanding view over the River Dinan valley and was in sight of five other raths. At some point toward the end of the first millenium a church was present here called Teampall Mhaothail - the Church of Mothel. The buildings within the Rath were destroyed during the Viking raid of 928 A.D. and many of the inhabitants sought shelter in the cave ‘Dearc Fhearna’ and were killed there. The rath is now an importance refuge for wildlife and has been protected by planting with a variety of trees including oak, beech, hazel, hawthorn, blackthorn, pine and spruce. The understory supports wildflowers such as bluebells, primroses and others common to the hedgerows.
Mothel is an historic area on the eastern edge of the River Dinan basin which contains the ruins of an old church (rebuilt in the 1730s) and graveyard, replaced the destroyed Church of Mothel that was in the Rath probably at the beginning of the last millennium. The surrounding lands were in the ownership of Anglo-Normans since the 1200s.