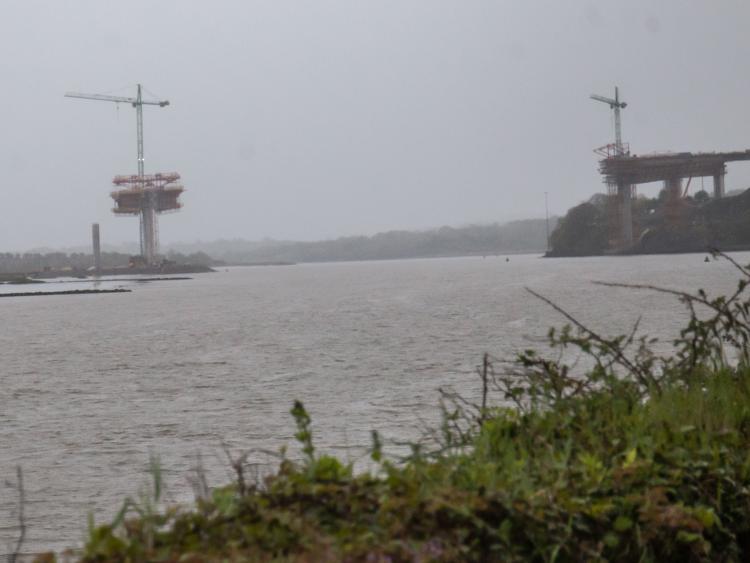 A view of the bridge under construction from the Kilkenny side

The €250 million N25 New Ross Bypass scheme is currently under construction at the Pink Rock in Glenmore, and remains on course to be open in 2019.

The design and construction phase of the public private partnership contract is approximately two-thirds through, Kilkenny County Council have confirmed.

The scheme commences at a roundabout junction with the existing N25 at Glenmore in south Kilkenny before crossing over the River Barrow on the 3 tower Extrados bridge extending for approximately 900 metres from Pink Rock in Kilkenny to Stokestown in Wexford and continuing until it ties in with the N30 at Corcoran’s Cross.

On the Barrow Bridge - the naming of which is open to public consultation - there will be three pylons between 15m and approximately 25m high.

On the Kilkenny side of the bridge, the approach deck spans are nearing completion.

The most recent phase of the works on the N25 at Glenmore became operational on May 29. The full circulatory roundabout will be operational under temporary traffic management for this phase which is anticipated to be in place until July.

The L7513 Ballyverneen Road will also re-open in the coming weeks. Also on the Kilkenny side, the bridge deck for Ballyverneen Overbridge is under construction and Glenmore Underbridge is nearing completion.

The roads scheme was first mooted almost three decades ago due to the route being wholly reliant on O’Hanrahan Bridge and significant traffic delays and reported injury collisions in and around New Ross.

A special strength concrete of 95 newtons is being made in Kilmacow especially for part of the bridge’s construction and it alone will hold 27,000 cubic metres of concrete by the time it’s finished.