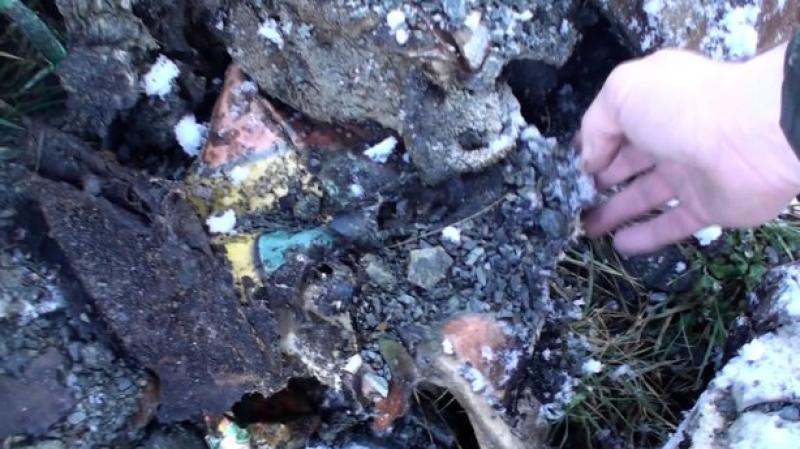 A scene from the Prime Time Investigates programme

The local authority was ranked 18th of the 30 local authorities analysed as part of a special report by RTÉ Investigates where 1 is ranked as the most active council for regulating and enforcing waste services per number of waste permits held in the local authority and 30 as the least active.

The figures were published as part of a six month undercover investigation by RTÉ to highlight the increasing problem of illegal dumping and how Councils regulate and prosecute waste offenders.

"The issue of illegal dumping needs to continue to be tackled in a concerted and partnership approach between the EPA,
Department of Communication, Climate Action and Environment, local authorities, community groups and above all the public.

"The vast majority of households respect the environment and are responsible when it comes to the disposal of their waste.

"However, the irresponsible actions of a minority of householders threatens the preservation and protection of our magnificent countryside, landscapes and waterways.

"Kilkenny County Council operates within a highly regulated regime in relation to inspections and enforcement of waste legislation designed to protect the environment.

"Since 2014, the EPA have set targets for each local authority on waste permit inspections and these are being delivered by Council staff who undertake routine inspections and enforcement notices and prosecutions for non compliance or illegal dumping.

"In their “Local Authority Environmental Performance Assessment Report 2014 – 2016”, the EPA gave Kilkenny County Council an overall grade of ‘excellent’ in relation to the Council’s performance in delivering environmental enforcement activities.

"That said, the Council is not complacent and realises that continuing to tackle the issue of illegal dumping in
particular will remain very challenging.

"The Council takes its role in environmental protection very seriously. It should be noted that in 2017, Kilkenny County Council received over 1,000 Environmental Complaints, mostly in relation to illegal dumping and litter incidents.

"All of these complaints have been investigated and appropriate action taken. Over 130 enforcement actions were taken in
2017, including issuing 47 litter fines and over 20 enforcement notices under the Waste Management Act requiring waste operators to take corrective action in relation to the collection, storage and disposal of waste.

"In 2018, Kilkenny County Council will undertake over 5,600 environmental inspections. Householders and businesses should ensure that they are disposing of their own waste through approved waste providers and authorised waste facilities.

"The public also have a key role to play in tackling illegal dumping by being vigilant and notifying the Council of any
wrongdoing."

Kilkenny prosecuted 30 waste offenders between 2014 and 2016, 20 less than the national average of 50 and employed 3 waste staff for the 26 waste permits.

Kilkenny was ranked 23rd for its number of waste staff and 25th for waste facility inspections.

RTÉ found that Donegal is the poorest performing council in Ireland for its inspection rate of its facilities and for its investment in waste services, between 2014 and 2016 Donegal had just two members of staff to regulate the 44 waste permits in the area.

Between 2015 and 2016 Donegal spent €4.20 per person on waste management, planning and regulation services compared to the national average of €17.22.