It was on the window of a heritage house, he says 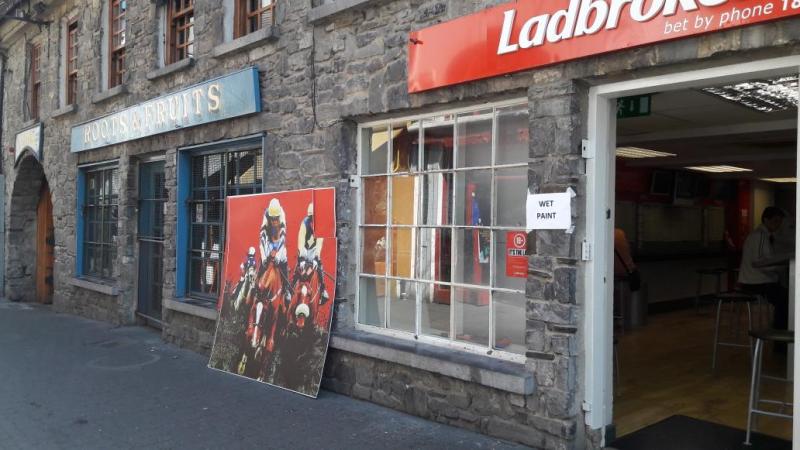 A Kilkenny councillor has taken to social media to highlight a "small planning success" in getting hoarding removed from the window of a heritage house where Labrokes betting company currently resides.

Cllr Malcolm Noonan said: "The removal of an illustrated board that was covering a shop window in Kieran street in Kilkenny, could set a positive precedence for signage policy in the city.

"I wish to commend our Planning Enforcement Section in acting swiftly on this; given that I had only lodged the complaint a number of weeks ago.

"There are other outstanding cases that are taking far longer to resolve, through no fault of our staff. Enforcement can be a very protracted and frustrating process."

A small planning success; getting this hoarding removed from the window of a heritage house #kilkenny @greenparty_ie pic.twitter.com/EEiPywMkGv

Cllr Noonan added: "Kytler's Inn or hall as it was called when built in 1449, was significantly modified over the centuries but it forms a pivotal role in our townscape. Indeed the whole town centre contains a number of Architectural Conservation Areas (ACAs) and are, or at least should be subject to a strict planning code.

"Therefore it is important that whomever occupies our town centre premises, that they respect this as a heritage town."

Cllr Noonan said that he had been critical of the current City Development Plan in that "it seemed to be ambiguous in wording to have allowed the proliferation of a lot of inappropriate signage, shop fronts and the removal of heritage features from historic buildings".

He said that the next development plan needed to return to the values of previous plans which had served Kilkenny well as one of Ireland's most important heritage towns.

"While I am delighted with this outcome, I feel that there are many other premises and buildings in the city which need to be dealt with.

"At the recent 'Talk of the Town' public meeting that I held a few weeks ago, I was taken by the level of public interest in this issue but also with the sense of disappointment among people that standards are slipping.

"Ultimately I think that we need to employ a town architect taking the lead from towns like Clonakilty and Westport.

"A town architect could work with city planners, retailers and residents of the city to develop a single approach to the design of our streets, developing a colour palette for all our streets, improving access for pedestrians and cyclists and strengthening our built heritage assets.

"Kilkenny's built heritage is too important not to take such an approach," he added.