Kilkenny natives who died outside the County during Civil War conflict 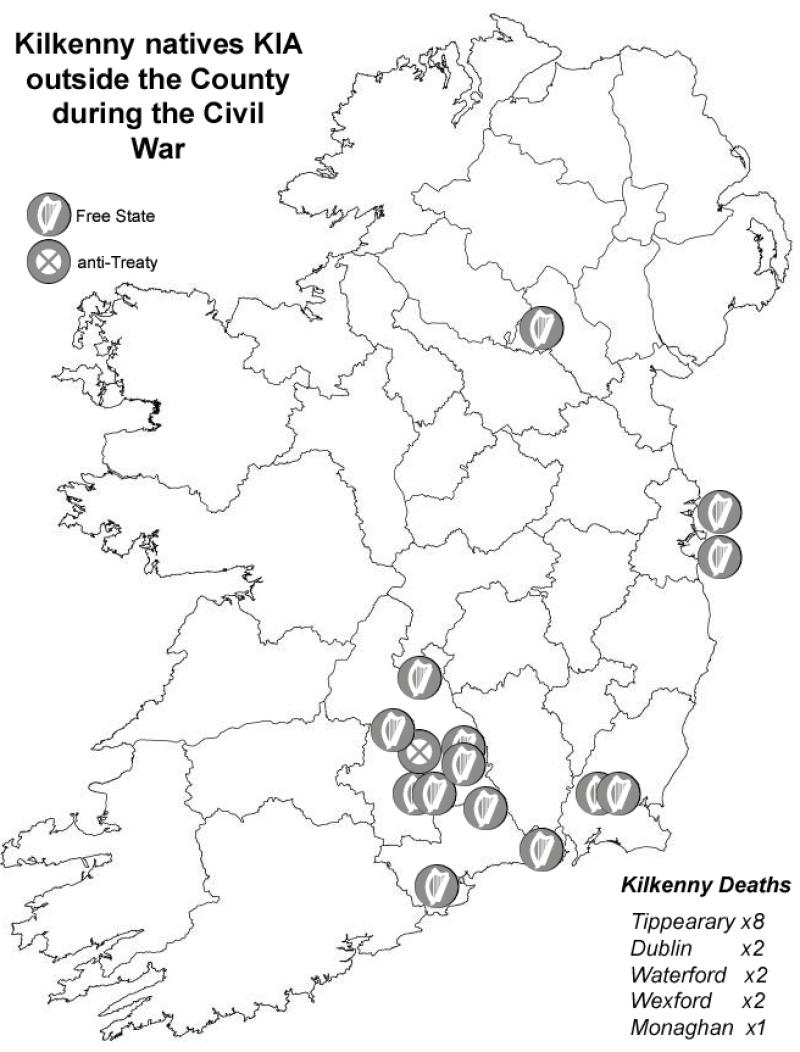 Following last week’s article which recorded those who died as a result of the Civil War within the four corners of County Kilkenny, this week’s article attempts, for the first time, to list those Kilkenny natives who were killed in other parts of the country during the Civil War.
Surprisingly, more Kilkenny natives were killed outside the county during the conflict than inside. Although the total number of Civil War fatalities within the county was 26, just 14 of those killed were natives of Kilkenny. This was in contrast to the 15 Kilkenny men who were killed outside the county as a result of the conflict. Thus, the total number of Kilkenny natives who died as a result of the Civil War – both inside and outside the county – was 29.
It is important to note that there is a possibility of additional unregistered/undocumented deaths, especially on the anti-Treaty side which were much less likely to be recorded.
Reasons for the geographical spread of casualties
Both the Free State Army and the anti-Treaty IRA were divided into hierarchical military command structures. Although County Kilkenny was theoretically its own military Brigade, it was part of a much larger Division. From the Free State perspective, Kilkenny was part of the ‘2nd Southern Command’ or ‘Southeast Command’ which eventually included Kilkenny, Waterford, South Tipperary, south Wexford and parts of Carlow. Thus, Kilkenny Free State soldiers could be stationed anywhere within the Division (and vice versa for natives of other counties). Furthermore, Kilkenny City was HQ of the whole Free State Southeast Command, led by Tipperary native Colonel-Commandant J.T. Prout. The fact that County Kilkenny, in the early stages, acted as a buffer zone between the Free State forces in Leinster and the anti-Treaty strongholds in counties Tipperary and Waterford in the ‘Munster Republic’, also adds to the complexity.
From the anti-Treaty perspective, they used the previous IRA structure known as the ‘2nd Southern Division’, which was made up of Kilkenny, Tipperary, and parts of Limerick. As the Civil War progressed, this was of much less significance as anti-Treaty Flying Columns were required to move around the Kilkenny and Tipperary countryside, while generally using their own initiative (but remaining in communication with their commanders where possible).
Pattern of the Civil War
The Civil War, lasting from June 1922 to May 1923, can be divided into a number of stages. Besides the opening salvos that took place in Dublin, much of the focus for the summer and autumn of 1922 was directed on the Southeast Command of the Free State Army, HQed in Kilkenny. By the middle of July 1922, the Free State army had forced the anti-Treaty IRA out of the towns in Kilkenny, most notably Callan, which had been an anti-Treaty stronghold for a number of months. The ‘big bridge’ in the town was unforgettably destroyed in the evacuation to impede Free State troops. The focus of the attacks then moved to Waterford City, which was assaulted from the Kilkenny side of the River Suir by Prout and his men. Once this was captured, the focus turned to Carrick-on-Suir at the beginning of August 1922. The town was attacked from the Piltown side. Clonmel and Cahir were also captured by the Free State Army subsequently, but as the tumultuous autumn of 1922 progressed, a number of Kilkenny Free State soldiers were killed during ambushes in south Tipperary. Guerrilla type tactics, which had been successful for the IRA against the Crown Forces during the previous years, were the main feature of the remainder of the war, along with the anti-Treaty attacks on the rail network.
Analysis of Kilkenny natives killed outside the county during the Civil War
As stated, 15 Kilkenny natives (at current count) were killed outside the county during the Civil War. Fourteen were Free State soldiers, and one was anti-Treaty. Two Kilkenny natives were killed in Dublin in the first two days of the Civil War, with one dying in Monaghan from illness. Eight Kilkenny men (including one anti-Treaty) were killed in County Tipperary, the majority shot on the front line in altercations and ambushes. Two Kilkenny natives were killed in Waterford from ‘friendly-fire’ accidents, while two Kilkenny men – Edward Gorman (City) and Patrick Horan (Callan) – were executed in County Wexford by anti-Treaty forces in reprisal for Free State initiated executions in Wexford jail. Perhaps the most tragic death was that of Free State soldier Joseph Bergin of Skehana, Castlecomer, who was killed in an ambush in Tipperary on the very day of his 21st birthday.
One disturbing statistic of the Civil War was the amount of self-inflicted or ‘friendly fire’ fatalities which amounted to nine Kilkenny men (encompassing those who died in Kilkenny and Kilkenny natives who died outside the county). All but one of these deaths were Free State soldiers. This highlights the inexperience and rudimentary training provided by the fledgling Free State Army.
In general, of the Free State soldiers who lost their lives, the majority classified their occupation prior to joining the army as ‘labourer’ (usually farm labouring). As this was usually low paid, with unreliable days of employment, it is fair to assume that many of the rank-and-file joined the Free State Army for financial reasons. The average age of those Kilkenny men killed outside the county was 23.6 years. The youngest killed was aged 16, the oldest was 35.

(Kilkenny, In Times of Revolution, 1900-1923 by Eoin Swithin Walsh is published by Merrion Press and will be released on Wednesday 15th August 2018 during a lecture as part of the Kilkenny Arts Festival, followed by a launch in Dubray’s in Market Cross Shopping Centre @6.30pm).

James Walsh (Free State, Killaloe, Callan). Died June 29, 1922 . Aged 22. Killed in Dublin during the storming of the anti-Treaty garrison lodged in the Four Courts.
Daniel Brennan (Free State, Dublin Road, Kilkenny). Died July 1, 1922. Shot dead when sniping from the Ballast Office towards the anti-Treaty IRA garrison on O'Connell Stree. 18 years of age.
Joseph Bergin (Free State, Skehana, Castlecomer). Died August 16, 1922. Killed on the very day of his 21st birthday in Woodroofe, near Clonmel, having been ambushed by an anti-treaty unit.
Richard Cantwell (Free State, Clough, Castlecomer) Died August 21, 1922. Died after being shot in an anti-Treaty IRA ambush at Redmondstown, County Tipperary.
William Purcell (Free State, Kellymount, Paulstown). Died September 30, 1922. aged 16. Shot accidently in the stomach by a comrade in Templemore Free State Barracks.
Thomas Brownrigg (Free State, Dunnamaggin) Died October 8. 1922 and Patrick Hayes (Free State, Barrack Street, Kilkenny), Died October 12. 1922. Both men died from bullet wounds received in an ambush near Woodroofe, Co Tipperary, on 2 October 1922.
James Burke (Free State, Barna, Urlingford) Died October 22, 1922. Accidentally shot himself while on sentry duty in the town of Cashel, aged 18.
James Dunne (Free State, Threecastles). Died October 26, 1922. Shot accidently by a Free State comrade in Dungarvan Military Barracks, which was situated in the local workhouse.
James Gardiner (Free State, Chatsworth Street, Castlecomer). Died December 10, 1922. Shot at Westgate, Carrick-on-Suir, during an Anti-Treaty takeover of the town.
Edward Gorman (Free State, Wellington Sq, Kilkenny) and Patrick Horan (Free State, Flag Lane, Callan). Died on March 24, 1922. Both men were executed in Adamstown, County Wexford by the anti-Treaty IRA after they had been abducted from a pub the previous night in nearby Palace East. Their executions were in reprisal for Free State executions in Wexford Jail.
Richard Duggan (Free State, Scart, Mullinavat). Died March 11, 1923. Accidently shot by a comrade he was in conversation with in Waterford City on 6 March 1923, passing a way some days later from sepsis.
Thomas Davis (Free State, Low Street, Thomastown) Died on April 8, 1923 in Clones, County Monaghan, from a suspected pneumonia infection. Prior to enlisting in the Free State Army he was employed by the Auxiliaries in Woodstock House where he helped with their searches. For this reason he was a denied a military funeral in Thomastown.
Edward Somers (Anti Treaty, Mallardstown, Callan). Died on April 16, 1923. Captain Ned Somers was a Free State officer until he defected to the anti-Treaty side in December 1922.
He was shot dead by Free State soldiers near Rosegreen, Co Tipperary, when he attempted to escape from the ruins of a castle he was resting in, which had become surrounded.