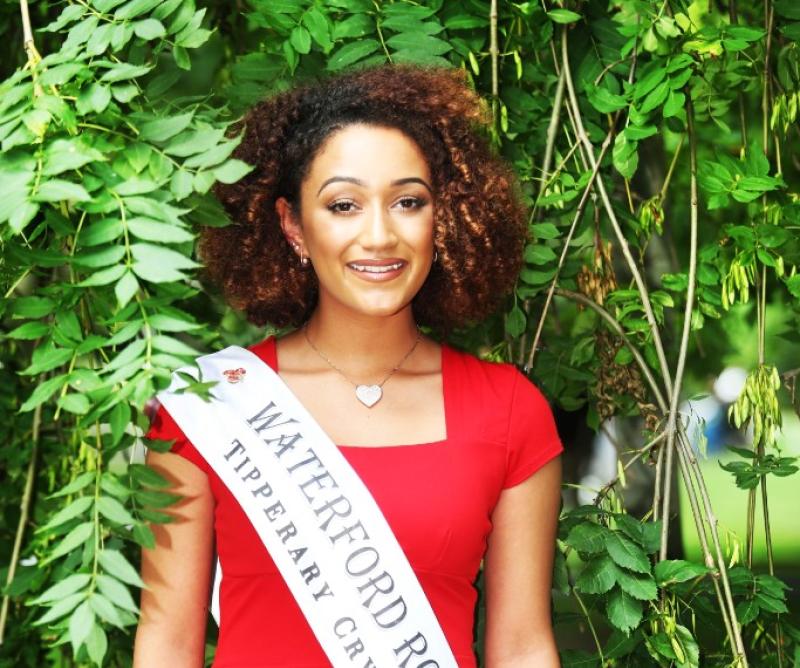 Kirsten was installed as the bookies favourite to win the Rose of Tralee on Tuesday morning after impressing during her television interview with Daithí O Sé on Monday.

During the televised finals the 21-year-old multimedia student from Mullinavat told Daithí about her Zambian heritage, telling the story of her dad meeting her mother while on holiday in Waterford from the Curragh where he was a soldier.

She explained that she works a number of jobs, including as a personal stylist at the Redlane Boutique in Tramore. She also does some modelling for the store thanks to her attention-grabbing hair.

Kirsten also told the story of her birth when she was overdue by ten days. At that time, her Dad was due to head back to Dublin and abroad on duty, and as bad luck would have it, Kirsten was born just after he had left. She was almost two years old when he met her for the first time at home in Waterford.

Kirsten also had plenty of support in the Dome with her grandparents, parents, two brothers and sister in attendance in Tralee. Her grandfather Charlie Maher is a well known photographer in South Kilkenny.

The Waterford Rose explained how she is in fact from Mullinavat, just over the border in Kilkenny, pledging her allegience to the black and amber in GAA terms, but the blue and white on the hockey pitch.

Kirsten in fact plays with Waterford Hockey Club when she was 16, but had also played the sports in school. She referenced the senior women's hockey team for putting the sport on the map with their run to the recent World Cup final.

The WIT student made reference to the attention she's received because of the colour of her skin in the media in the build-up to the festival, describing that focus as "a little unfair."

"I'm the same as any other girl doing the Rose of Tralee. I feel they just touched off one tiny little part of me when there's thousands of other things about me that are there to be spoken about,"  Kirsten said.

"I suppose it shows that we need to look past what we look like or the colour of our skin, our hair, religion, anything like that; we're all the same. It's amazing sitting here with all of these amazing women and everyone's so different," she added.

Kirsten concluded her stage appearance with a beautiful rendition of 'Feeling Good.' She was announced as the winner in Tuesday night's live final.