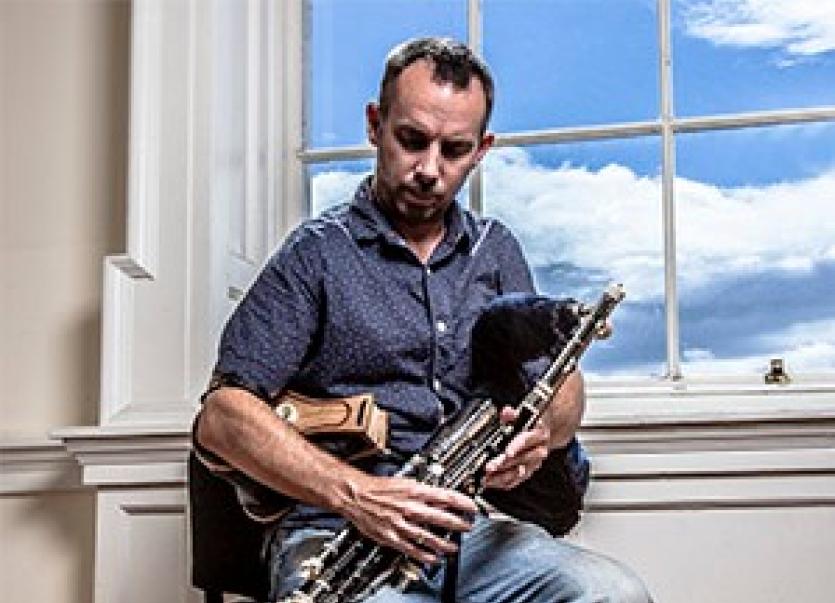 Leonard Barry, one of Ireland’s foremost uilleann pipers in Ireland will play a Victor Mullally set of pipes at the concert

On Saturday, September 29 some of the best musicians in the country gather to pay tribute to a Kilkennyman who made a special contribution to music in Ireland.
Victor Mullally, one of the foremost uilleann pipe makers of his generation, will be remembered at a special concert in the Club House Hotel.
Without the instrument maker there is no music and this night celebrates the maker through the music.
An impressive line-up is headed by legendary fiddle and pipe duet Mick O’Brien and Caoimhin O’Raghaillaig.
The American-born harmonica, concertina, banjo, jaw harp player and singer Rick Epping will add a different dimension to the night’s proceedings.
Shamie O’Dowd from Sligo first came to national prominence as a member of the band Dervish. On guitar, fiddle, and vocals he has toured regularly with Mairtin O’Connor and Cathal Hayden.
Leonard Barry is one of Ireland’s foremost uilleann pipers and will be playing a Victor Mullally set of pipes.
Leonard has made many performances on national TV and radio as well as touring the world with his pipes.
Singer Nell NI Chronin will be performing as will Andy Morrow (fiddle) from Co Leitrim, who has toured extensively throughout Europe and the USA and his playing has been described as “sweet and majestic.
Padraig McGovern will play ‘Victor’s Master Set’ of Uilleann pipes, a set with four regulators and four drones.
Most sets of pipes have three of each and to build an instrument with four of each, in tune, is a feat of engineering which few have achieved and none have surpassed.
A highly regarded tutor of the Uilleann Pipes, Padraig has released a number of albums including Forgotten Gems with Peter Carberry.
His 2015 project, The Pipes, produced by Donal Dineen with pipers Leonard Barry and Maitiú Ó Casaide and visual artists Guillermo Carrion and Lionel Palun, was released to critical acclaim.