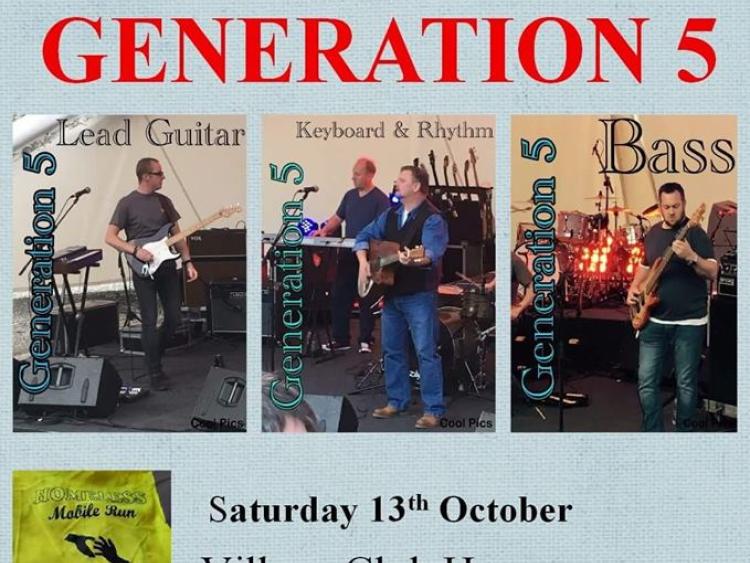 Dublin charity ‘Homeless Mobile Run’ will host a fundraiser in Kilkenny this month. The concert, featuring local band Generation 5, will take place in the Village Club House in Larchfield on Saturday 13th October.

The Homeless Mobile Run are a non-profit organisation that feeds and clothes over 250 homeless people on Dublin’s Grafton Street. While the charity consists mostly of volunteers in Dublin, there are five volunteers who work with them from Kilkenny; Mary Pierce, her husband Brendan Pierce, Sheila Kelly, Sharon Phelan and Evelyn Hourigan.

The organisation’s most recent fundraiser, ‘Rosie O’Grady’s Revisited’, a disco night held in the Springhill Hotel last June, raised €4,500. €2,000 of this went directly to Dublin for flasks and tables. €1,000 went towards a butcher’s account to supply food for the homeless. The remainder was spent on supplying tents and waterproof sleeping bag covers.

It is hoped that the upcoming concert will be another success, and will raise vital funds to help the homeless. Volunteer Mary Pierce trusts the local Kilkenny community completely to support this event. She explained that the help she has received here has been “absolutely incredible”, declaring “It’s unbelievable. I’d say there’s not a county in Ireland that could be more supportive.”

The concert is set to be an evening full of great music and entertainment, all in aid of a fantastic cause. The stars of the show, local family band Generation 5, play every genre from 80s and 90s up to modern chart hits.